Since the Russians shot their Sputnik into space, my generation has watched the mad dash to see who can introduce the next gee-whiz gadget.  Some of us grew up thinking high-tech was a pop-up toaster or a TV remote control.  That’s why we are easily dazzled by what galloping technology has produced, but we are rarely surprised.
It’s important for Baby Boomers to make sure there are plenty of seats at the thinking-about-the-future table reserved for those who have yet to discover their first gray hair.  I don’t always embrace the newfangled ideas—Twitter, Facebook et al—but I’ve found there’s value in listening, because I’m apt to learn something.
And that’s why I was glad to get a call from the 30-something chairman of the board of Georgia’s Department of Natural Resources (DNR).  Gainesville’s Philip A. Wilheit Jr. (Phip) and I go back almost 30 years.  During the 1990s, his photo was stuck to our refrigerator.  Phip was guarding third base as our youngest, Eric, was hoping to steal home during their high school baseball game.
Phip is a gadget guy.  Walk into his office, and you’ll see all of 2014’s cool tools.  But he’s no geek. With his chiseled physique, he’s ready to scale a rock wall. And you’ll have a hard time finding a more ardent outdoorsman or savvier businessman. So when Google contacted DNR about wanting its geospatial data, a light bulb came on. Phip says negotiations started for a public-private venture that would produce a win-win for Google Earth and Georgians. The chairman praised DNR’s John Martin and his highly-talented technology team who led the discussions.  Commissioner Mark Williams is excited to have his department’s already-stretched funds leveraged, too.
The price tag of an all-decked-out-with-bells-and-whistles website could have cost $250,000.  For a fraction of that, DNR has rolled out an Internet mobile application that lets you plan hiking, camping, fishing, golfing, visiting historical sites, bird-watching or whatever before you ever get off the couch.  Simply click on www.georgiaoutdoormap.com.  You’ll find directions, information on handicap accessibility, telephone numbers and links for additional details.  A “near-me” feature allows you to identify recreational opportunities nearby.


With the help of Georgia State University’s geosciences gurus, the DNR-Google effort, creating the interactive Georgia Outdoor Map, is what the DNR chairman believes is a first of its kind in the nation.  Phip says DNR has “the largest amount of geospatial data of any organization in Georgia.”  And since it was all in the public domain, he thought:  “Why not put it to use in an easy-to-navigate way?”  After all, Georgia—from the sea to the mountains—has so much to offer.
Phip thinks this is just the start.  He sees other departments such as the Georgia Department of Transportation and Georgia Emergency Management Agency using the new platform.  He cited the recent ice and snow storms.
“With this kind of mobile app, a person could have located the shelter nearest them.”  Another boost is feedback to DNR, helping the department to manage and market what the public uses most.
Remember the old commercial: “This is not your father’s Oldsmobile?”  Well, the Oldsmobile and old-school road maps are vanishing. If you handed a teenager a 1960s road map, he or she would most likely wonder: “What’s this?  And an Oldsmobile—what’s that?”


Our children crisscrossed Georgia in the back of Oldsmobile station wagons, but their children wouldn’t know an Oldsmobile if they saw one.  That’s why Gov. Nathan Deal is smart to engage eager-to-explore-new-ideas folks on Georgia’s leadership team.  Look how Phip’s phone call enlightened me.  Spring is here.  I’m itching to get outside, and the young guy already has the gray-headed guy’s thumbs clicking on www.georgiaoutdoormap.com. 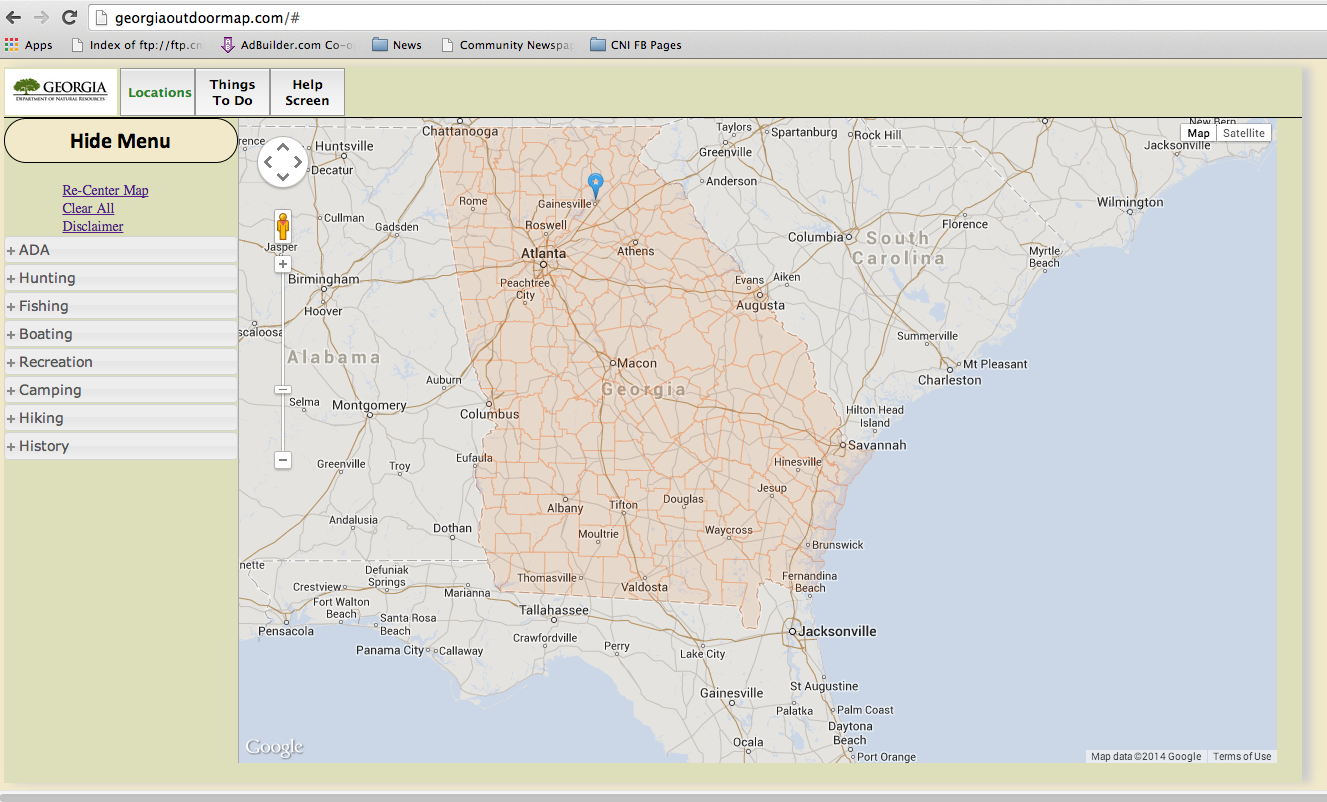