Nothing compares to friendly hometown service

UGA freshmen didn’t have cars back in 1966, so my best transportation was wearing out the leather on the bottoms of my oxblood Weejuns.  One of my favorite destinations was Clayton Street, after a brief stop at the Varsity on the corner of College Avenue and Broad Street.
There were other men’s stores, but the big three were: Dick Ferguson’s, Gunn’s, along with West 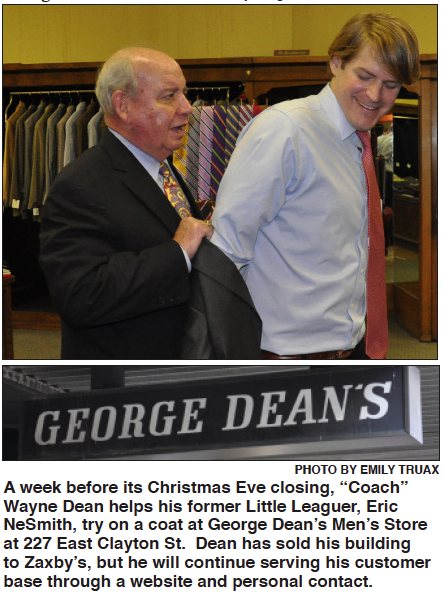 and Dean.  Gunn’s is gone.  Dick Ferguson’s, celebrating its 80th year, moved to Beechwood 20 years ago.  And now, George Dean’s Men’s Store is turning out its lights on Christmas Eve.

Wayne Dean, who took over from his father, George, wasn’t quite ready to retire, but Zaxby’s really wanted his location in the middle of downtown.  With 45 years of retailing, he’s pushing in the clutch and shifting to another gear of selling.  He’ll keep his lines of merchandise and sell on an individual basis to his loyal customers.
Since moving back to Athens in 1990, I’ve depended on Dick, Wayne and Gene Lewis at Lamar Lewis Shoes to keep me attired.  I like going into their stores.  You know them, and they know you.   They don’t have to ask what size, and they know my personal tastes.  And they’ll send me a bill at the end of the month.
One of my favorite services they offer is modern-day Pony Express.  With a call, Dick, Wayne, Gene or one of their associates will be standing outside with my merchandise.  All I have to do is stick my left hand out as I drive by.   There’s absolutely nothing to compare to hometown service.
I joke with Dick that I do my initial shopping with him, through his windows, on the way to Beechwood Cinemas.  Wednesday, our son Eric and I visited George Dean’s one more time.  First, we stood on the Clayton Street sidewalk, perusing what was in the window, just as I did in 1966.  Eric still calls Wayne “Coach,” from Little League days.
Once inside 227 East Clayton Street, I paused and took it all in.  The high ceiling, the smell of new clothes and that nostalgic feel that took me back, way back.  It was old-home week, visiting, laughing, backslapping and reminiscing.  And, of course, we had to buy a few things.  I repeat: there’s absolutely nothing to compare to hometown service.


That’s why I like going into Appointments at Five.  When it’s gift-giving time, I could stroll in, close my eyes, point and not make a bad choice.  I like to banter with Kitty and Jenny.  They make you feel like a childhood friend.  You could put a piece of Bazooka bubble gum in one of their exquisitely wrapped packages and most folks would ooh and aah.
Athens is loaded with large stores with extended hours.  I find them very convenient, but there’s something special about bounding up the backstairs of Normal Hardware in Normaltown.  I miss the Saturday mornings of leaning on the front counter and solving the world’s problems with Hugh Logan.  Now, I look to his son, Bob, or longtime assistant, Dan, to help me find what I need.  I like to hear the wood floor creak as I explore for what else I might need.  If I owned a hardware store, I’d go broke, hauling stuff home.
That’s a ditto for a bookstore.  I can’t walk out empty-handed.  Barnes & Noble is a favorite destination, but I’ve also discovered Avid Books on Prince Avenue.  Janet Geddis has created a magical place for booklovers like me.  And if I want to keep my budget balanced, I have to limit my trips to Jackson Street Books—so many tempting books.


I know it’s not 1966 anymore.  Even Bass Weejuns aren’t the same.  Still, we have dozens of home-owned businesses that make Athens special.  Those shops would appreciate your patronage, too.  And as convenient as the Internet is, I promise that Jeff Bezos, CEO of Amazon, won’t give you a hug like Wayne Dean will.  But you better hurry. His doors are closing on Wednesday.