Lots to see and eat on Georgia’s Highway 15 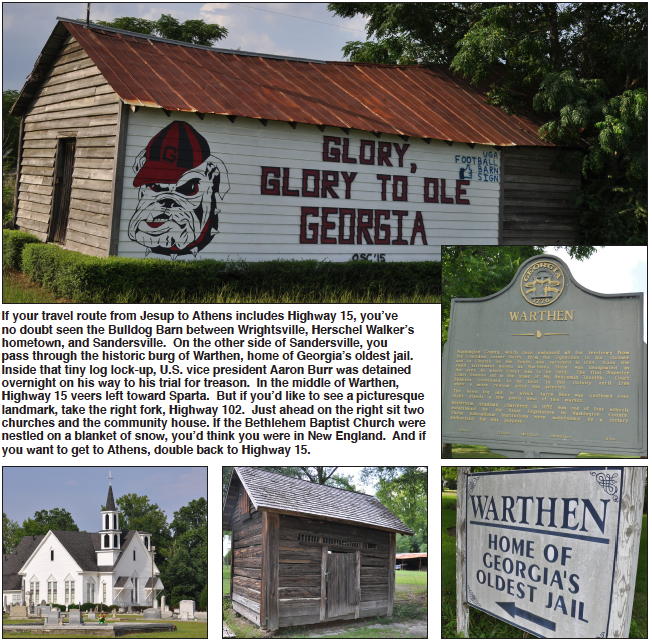 From the backseat window of a 1964 Buick, I got my first glimpse of Georgia’s Highway 15.  I can remember the route’s landmarks as well as the brocade seat covers in Mrs. Ruth Oglesby’s blue and white LeSabre.  The Jesup High School teacher was pursuing an advanced degree at The University of Georgia.  She invited me to tag along with John, her youngest son, on those weekend trips.

Mrs. Oglesby got her 6th-year certificate, and I got attached to Athens. When John and I left for college, he stayed straight on Highway 341 on his way to Atlanta and Georgia Tech.  In downtown Baxley, I turned right onto Highway 15 toward Athens and UGA.  And for 51 years, I’ve been rolling up and down that stretch of two-lane blacktop.
I still chuckle when I pass through Greensboro.  In 1966, I stayed–with my parents—in the Nathaniel Greene Motel.  They thought the 210 miles were too much for one day.  We motored the last 35 miles the next morning.  Now, I can’t count the times that I’ve driven the 420-mile round trip in the same day.
During their growing-up years, our children—Alan, Emily and Eric—made plenty of those up-and-back trips. We cheered for the Wayne County Yellow Jackets on Friday night.  And then before the rooster crowed on Saturday, we’d beeline for Athens.
One morning, I kept hearing beep-beep, over and over.  Emily and her friend, Laura Peel, who were sitting backwards in our Oldsmobile station wagon’s third seat, were holding up a hand-lettered sign: “Honk, if you love the Dawgs.”
After tailgating under the big oaks on the campus, we’d soak up sunshine in Sanford Stadium’s Section 106, cheering for the Bulldogs.  Our kids can still mimic Larry Munson’s “There goes Herschel.  There goes Herschel!”


But in 1964, the future Heisman winner was just toddling around when Mrs. Oglesby announced, “Wrightsville is halfway to Athens.”  That called for a sit-down supper at Ralph Evans Restaurant across from the Johnson County courthouse.  And since then, we’ve considered Herschel Walker’s hometown to be the midway point.
On my last trip up north on Highway 15, I made several stops to take snapshots of my favorite landmarks between Wrightsville and Athens, two hours up the road.  The first, the Bulldog Barn, is in Washington County, courtesy of Tennille’s Ross Smith and his group called Old Savannah Crew (OSC).  Within hours after a Georgia game, Ross and OSC are painting a new message on the side of the lapboard building.  A recent addition is a symbolic hedge that wraps around the tin-roofed structure.
On Sept. 5, the University of Louisiana-Monroe’s Warhawks will swoop between UGA’s fabled hedges.  If you happen to be driving up Highway 15 that Saturday, these landmarks are reminders you’re getting close to seeing who will be the Bulldog quarterback:  Brice Ramsey, Faton Bauta or Jesup’s Greyson Lambert.
Along the way, you can experience what our son, Eric, calls “The Highway 15 Trifecta”: a Dairylane chocolate shake in Sandersville, a Holcomb’s Bar-B-Que sandwich in White Plains and a snack from Hot Thomas’ Bar-B-Que, just past the Iron Horse on the way to Watkinsville.
There’s plenty to see and eat on 15.
Enjoy the ride.