Doc, this Thanksgiving tribute is for you

If I close my eyes tight enough, I can see backwards—about 60 years.  I can see him, walking into my bedroom with his black leather medical bag.   That’s how long he’s been in my life. 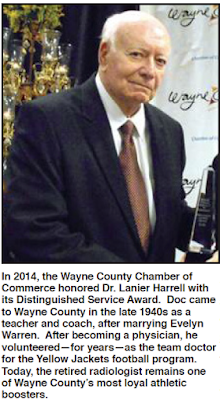 Years later, I was in his South Macon Street office.  With the physique of a stick, I asked him how to gain weight for football. He assured me that one day I would be glad to be slim.

Skinny and slow, I wasn’t much of a football player, but I was there when Coach Clint Madray berated the team for lousy play against Douglas.  Disgusted, he flung his Coke.  Splat!  Our team doctor was in Big Clint’s line of fire, but his friend didn’t flinch when the Real Thing dripped down the small of his back.  Doc just kept walking, and the Yellow Jackets got the message.  With Paul “Jet” Conner leading the way, Coffee County was ground into the turf in the second half.
In 1971, Doc walked back into my life or vice versa.  In a surprise move, I forgot my law-school plans and came home to join the Wayne County Press.  The next summer, I borrowed $3,000 for a down payment on a one-third interest in the upstart weekly that Doc co-founded with Norris Strickland in 1960.  By the time I got there, Norris was out.  Elliott Brack was in.
Doc was always the silent partner.  But if you were smart, you’d ask his advice.  He warned me, “This isn’t a get-your-money-back-quick investment.  It will be a long-term thing.”  Forty-three years later, Doc and I still laugh about that.  Even though Doc and I were partners for only four years, I give him credit for masterminding a strategy that was a pivotal point in my career.
In 1971 our 106-year-old competitor, The Jesup Sentinel, was dominant with seven pages of grocery advertising.  The Wayne County Press had zero.  As hard as I tried, I couldn’t convince IGA, Pantry Pride, Pic ‘N’ Save or Winn-Dixie to advertise with us.  Eventually, I targeted the largest grocer. I figured if Winn-Dixie advertised, the others would, too.
For four years, I made regular trips to Jacksonville to make my sales pitch to the decision-maker, Fred Hogue. I’d get up at 5 in the morning and scoot to Florida at 6.  My visits didn’t last long, so I’d be back in Jesup before noon.  Dozens of times, I heard: “Sorry, son.  No.”
Watching my persistent—but failed—attempts, Doc invited me to Wayne Memorial Hospital’s radiology department.  Sitting in his office, lit by the X-ray film screen, he shared an idea.  With new energy, I dashed to see Carey Brannen at American National Bank.  This time, he loaned me $10,000. From there, I went to Merrill-Lynch to buy Winn-Dixie stock.


A few days later, I asked, “Mr. Hogue, how long have I been coming to see you?”
Looking at the ceiling, he said, “A long time, son.”
“Mr. Hogue,” I said.  “My wife and I live in a 12-by-40 mobile home with a $61.83 mortgage payment.  I borrowed $3,000 to get into the newspaper business in my hometown, but now I’ve scraped up $10,000 to invest in one of the best companies in America.”  Sliding my Winn-Dixie stock across his desk, I said, “I have great confidence your company will give us a good return on our investment.  How about trusting us to do the same for Winn-Dixie?”
Within 20 minutes, I was gliding up U.S. 301 with a two-page ad for that afternoon’s edition.  Doc’s idea tipped the dominoes.  Within six months, all seven grocery pages were in the Wayne County Press.  On Dec. 29, 1976, we purchased The Jesup Sentinel to form The Press-Sentinel.  In the merger, Elliott and Doc sold their interests. Elliott (EEB) still sends me purple-penned notes.
And these days, Doc and I talk regularly, too, often over a meal.  I try to listen more.  When it comes to sports, politics, the Altamaha River, history and a host of other subjects, Doc’s been my Google long before Silicon Valley invented the amazing answer-most-any-question search engine.
As I look back over the past 60 years, I feel blessed for Doc’s contribution to my physical, mental and financial health.  I am not alone in this gratitude.  One word—irreplaceable—describes my friendship with Dr. Lanier Harrell. And on the eve of this Thanksgiving, Doc, I want you to know that.

(For more commentaries, go to www.dinknesmith.com)