Have you sent your comments to the Corps? 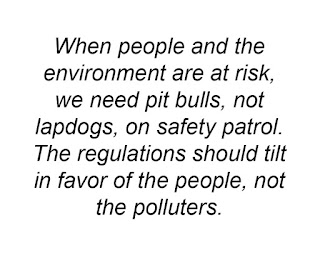 For 77 days. The clock has been ticking since the general public learned Republic Services intends to make Wayne County a national guinea pig for dumping this much toxic coal ash in one spot. The slick slip-itin-the-backdoor maneuver started on Jan. 4 with an application, in the name of Central Virginia Properties, LLC, to the Corps of Engineers. The Phoenix-based waste-management company was then mum, hoping the 30-day public-comment period would elapse before anyone noticed.
Nine days into the 30 days, your newspaper rang the alarm bell. Just as Republic wooed our officials with its sneaky, silver tongue in 2005, Wayne County was about to get snookered— again. Without Neill Herring’s telling Derby Waters what was up, Republic would have been toasting its strategy on Feb. 4.
As we now know, coal ash is toxic, containing dangerous heavy metals such as mercury, lead, beryllium and arsenic. While lobbyists for coal-fired plants negotiated to get coal ash labeled non-hazardous, we should find no comfort in the EPA’s ruling. When people and the environment are at risk, we need pit bulls, not lapdogs, on safety patrol. The regulations should tilt in favor of the people, not the polluters.
Thanks to the public outcry, along with strong support from Sen. Johnny Isakson, Sen. David Perdue and Rep. Buddy Carter, the Corps has given the public two extensions for comments. Still, there are dozens of unanswered questions. Now, there should be another extension to include a separate Corps-sponsored hearing. Wayne County has a right to know.
Unless the Corps grants an extension, the deadline for submitting your comments is next week, April 5.
Here’s what I wrote:

Dear Mr. Derinzy:
In my 67 years, I have never seen my hometown this embroiled or united. Our citizens are horrified. Jesup and Wayne County do not want its wetlands destroyed so that Republic Services can install a massive rail spur. I am grateful you were at the public meeting to hear the local voices, too.
Wetlands are a crucial part of our ecosystem, and what Republic has in mind will be devastating to our environment. The Broadhurst Environment Landfill is in a precarious location near the Little Penholloway Creek, which drains into the Penholloway Creek, which flows into the Altamaha River, which empties into the Atlantic Ocean. Toxic pollutants will go into our streams and groundwater if this rail spur is permitted. Our air quality will be at risk, too.
Hundreds of families in Wayne County drink shallow-well water because they can’t afford deep wells. There is no way to candy-coat Republic’s 100-railcars-of-toxic-coal-ash-per-day plan to turn our community into a trash bin for America. Destruction of the 25 acres of wetlands will be a monumental and tragic step toward turning our county into an environmental prostitute.
I know your major concern is the wetlands issue. But if you approve this permit, the consequences— intended and unintended—cannot be ignored. The U.S. Army Corps of Engineers holds our health and our future in its hands. We are a rural county, a David, up against a multibilliondollar conglomerate, a Goliath. Please, hear our pleas. Deny Central Virginia Properties, LLC’s application.
Thank you.
Sincerely,
Dink NeSmith
Tick, tick, tick.
The clock is ticking.
Have you sent your comments to the Corps? 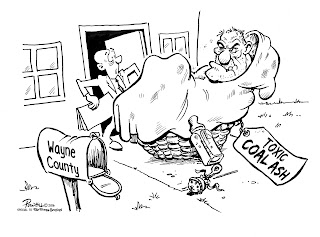 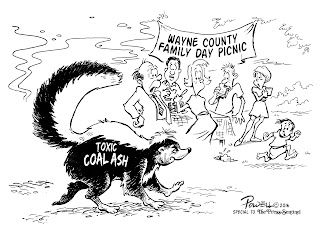