“Jingle bells, jingle bells, jingle all the way … oh what fun ….”
That’s what our commissioners must have been humming when private-landfill money was being waved under their noses by Addington and then Republic.
“Oh what fun” to have Santa Claus come to town and take Wayne County out of the messy garbage business. The jolly old fellow was giving us a place to dump our smelly stuff for free, and he was paying Wayne County to dump out-of-the-county garbage at Broadhurst, too. More than bells were jingling. Without considering entrapment, the commissioners instead must have heard money “jingling all the way” into the county’s treasury.
Ho, ho, ho, huh?
Unfortunately, our commissioners were seduced by the potential of millions of “easy” dollars. They ignored the old warning: “If it sounds too good to be true, it usually is.” That just-show-me-the-money attitude, without imagining the consequences, opened the door to today’s coal-ash crisis.
Hindsight is always 20-20. Looking back, we know our leaders—in 2005—were misled into amending a contract, with “minor” changes, which appears to have handcuffed our government. Now, Wayne County is an environmental prostitute with Republic Services as our pimp. In 2006, the first of 800,000 tons of coal ash was dumped on us.
Greed is a tempting trap. Greed motivated Wayne County to step into Republic’s snare. Greed motivated Republic to bargain for the now-infamous we-can-do-anything-we-want contract. And greed inspired Republic’s representatives to snooker us so their bonus checks would be bigger.
Dr. Norman Vincent Peale admonished, “There’s no right way to do a wrong thing.” Now, Wayne County is choking on the possibility of coal ash being shoved down our throats. Dumping millions of tons of toxic coal ash into our already-stressed environment is wrong. There is no right way Republic can justify the risk it will bring us. However, its greed could drive Republic’s stock price up on Wall Street.
Republic is now trying to win favor by telling us what a good neighbor it intends to be. There’ll be more open houses, picnics, fishing in the lake and charitable giving. I’m sorry. Too much has happened. I will never trust Republic’s coal-ash plan—at any price.
You probably got Republic’s slick brochure in the mail. You would have thought the waste-management company was selling lakefront lots to nature lovers. Where was the flock of buzzards perched on top of Mount Trashmore? Neither did the promotional piece have a scratch-and-sniff feature so you could catch a whiff of the “breathtakingly beautiful” odor. If Wayne County citizens want to tour a landfill, I suggest coal-ash-devastated Uniontown, Ala. I intend to visit there, but I won’t be taking a picnic basket.
There’s a saying: “Goodwill is won by many acts, but lost by one.” Republic lost its goodwill with me when it targeted our poor, rural community and set a Jingle-Bells trap. Waste-management companies know cash-strapped governments will take the bait. The feds have a name for it: social injustice.
Our county commissioners—past and present—were probably like me, unfamiliar with coal ash. I didn’t know about it until I read John Grisham’s Gray Mountain in 2014. Today, we should all know coal-ash dangers. Once the toxic heavy metals get into our environment, we are contaminated—forever.
We’re all susceptible to temptations. I’ve learned this the hard way: “Some of the best deals you will ever make are the ones you don’t make.” Addington and Republic came in here sounding like Santa Claus.
Ho, ho, ho … no!
This is one deal Wayne County should never have made. 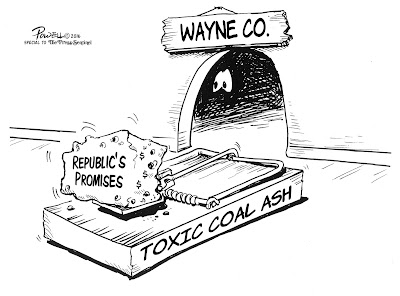 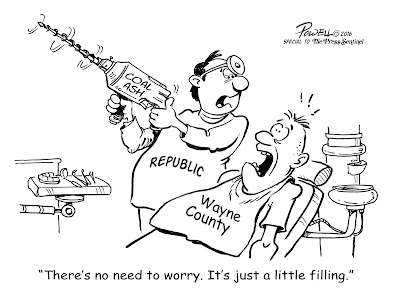