(This is an excerpt from comments that I made to Georgia’s Department of Natural Resources board on June 28, 2016, in Atlanta.)
Cowboy comedian Will Rogers said, “We are all ignorant … just in different subjects.” Until I read John Grisham’s Gray Mountain in 2014, I was unaware of coal combustion residuals (CCR)—coal ash. And when I learned my hometown of Jesup was in line to get daily shipments of 10,000 tons of this toxic substance, I knew this would not be good for our natural resources. Since mid-January, when we uncovered Republic Services’ quiet plan to haul in up to 100 rail cars per day of toxic ash, there hasn’t been a peaceful day or night.
For reasons we will never understand, last fall the EPA decided coal ash was not hazardous, despite the fact that it is loaded with numerous toxic heavy metals such as arsenic, lead, mercury and beryllium. Ask the people of Flint, Mich., what part of lead in their drinking water isn’t hazardous.
Fortunately, this DNR board can do more to protect Georgia’s 10 million citizens than is required by the suggested federal one-size-fits-all EPA rules. We all know that states such as Arizona—where Republic Services is headquartered—has an entirely different ecosystem from that of our beloved Georgia. That’s why you can insist our EPD have a unique set of rules for our unique environment.
The fact that Georgia Power, owner of one of the largest volumes of coal ash anywhere, is presently planning to follow EPA guidelines and relocate its coal ash away from water supplies should signal the liability such toxic materials pose.
Georgia Power seems to have no interest in partnering with operators of municipal solid-waste landfills for the managed disposal of toxic coal ash. If Georgia Power is worried, we should be, too. This DNR board can fulfill an important part of its mission by keeping harmful coal ash out of municipal solid- waste landfills and wetlands.
Today, we aren’t ignorant—as Will Rogers said—about coal ash. It is a huge threat to our air and our water. Water is one of Georgia’s greatest assets, and that is why the EPD should go additional steps further than the EPA.
• Coal ash must not be stored in any landfill built on top of wetlands. Georgia’s wetlands are a vital part of our water system, including its aquifers, which so many of us depend upon for drinking water.
• Georgia must be vigilant in making sure coal ash does not contaminate our drinking water. The first step is monitoring drinking water wells that are near any coal-ash site. North Carolina has already passed a law requiring this. Georgians deserve this protection, too.
• No landfill should be allowed to simply start taking toxic coal ash, as if it were no more than ordinary kitchen waste and roadside trash. A significant volume of these materials is a threat to water quality, and any landfill proposing to accept this toxic substance needs to put its case of safe handling before the affected public. And any such change in any landfill should be labeled a “Major Modification.” Republic has argued that its request in Wayne County to accept toxic coal ash is a minor modification. If dedicating a large part of the expanded landfill solely to the storage of this new toxic waste, is not a “major modification,” it is hard to understand what is.
• Major modifications should require new permits, after public notice, public hearings and full evidence of suitability of any particular site, including all precautions protecting surface water and groundwater from contamination.

I hope you are following the coal-ash story in Charlton County, too. I encourage you to insist the EPD propose rules to protect Georgians from coal ash. Furthermore, I recommend the EPD postpone permitting decisions until the proposed rules are adopted by this DNR board. A good target date would be July 1, 2017. That would allow the General Assembly to further consider the looming coal-ash problem, too. In the meantime, I encourage you and the EPD to open the proposed rules for additional public comments, with hopes of an EPD-sponsored hearing in Coastal Georgia.
We want to be quick in finding solutions for the proper handling and disposal of toxic coal ash. But we do not want to be in a hurry and make mistakes. Our state should be the leader in how to handle this environmental crisis.
I urge you to enact regulations to keep Coastal Georgia—and all of Georgia—from being branded as the nation’s toxic-waste dump. 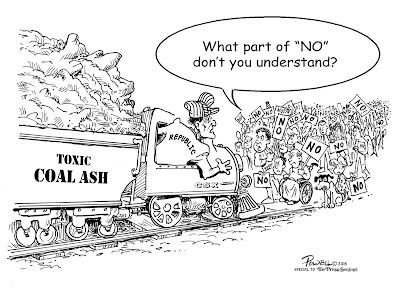