“We also share President Carter’s conviction that the wetlands in Wayne County are worth every effort to preserve and protect.”
Who said that?
Here’s a hint.
On March 16, he also told us that the Broadhurst Environmental Landfill is “breathtakingly beautiful.”
If you were in the Jesup auditorium of Coastal Pines Technical College that night, you heard the jeers when Russ Knocke, Republic Services’ vice president of communications, bragged to the standing-room-only audience what a beauty his company’s garbage dump is.  But to Mr. Knocke’s credit he apologized, saying, “We let the community down.  We have not been involved in the community as we need to be. … We failed you.”
No joke, Sherlock.
From an ivory tower—2,100 miles away in Phoenix—Republic crafted a strategy to turn its private landfill into potentially the nation’s largest toxic coal-ash depository.  Without regards to what citizens thought or cared, four mile-long rail spurs almost slipped through the United States Army Corps of Engineers permitting process, under the name of Central Virginia Properties, LLC.  Nine days into a 30-day comment period, the ploy was discovered.  And for eight months, tiny Wayne County has been up against America’s second-largest waste-management conglomerate.
From the start, it’s been a David-versus-Goliath battle.  When you consider Republic’s largest shareholder is Bill Gates, the richest man in the world, what else could you call our fight?  Fortune magazine has just reported his wealth has grown in 2016 by $15 billion to an estimated $90 billion.
Bill and Melinda Gates are using their wealth to be two of the most altruistic visionaries on the globe.  Their foundation is investing billions into solving worldwide woes.  Public health is one of their key initiatives.  That’s why I was dumbfounded when I learned Bill Gates stood to profit from putting our community and its environment at such an unhealthy risk.
The only way I could rationalize such contradictory behavior was that this must be a classic example—as a result of the enormous size of his holdings—of the proverbial left hand’s not knowing what the right hand was doing.
On April 19, I wrote to Gates and asked him to intervene on behalf of 30,000-plus distraught Wayne County citizens.  Two days later, I sent a letter to his chief investment officer, Michael Larson, who sits on Republic’s board of directors.  I waited and waited.  No reply from either.  Maybe they didn’t get my letters, so I tried something else.
When Republic Services hosted its annual meeting in Phoenix, I sent—via FedEx—individual packages to each officer and director.    Again, there was no reply.
Since mid-January, Wayne County volunteers have plunged their lives and dollars into this David-and-Goliath confrontation.  Now the surging band of crusaders to save Coastal Georgia stretches from Savannah to St. Marys and beyond.  People are realizing Wayne County’s threat is their pending disaster, too.  That’s why I appealed to former president Jimmy Carter to reach out to Bill Gates.  President Carter sent a handwritten note to the co-founder of Microsoft, asking him not to dump toxic coal ash in the ultrasensitive ecosystem of Broadhurst.
With President Carter’s permission, his letter was made public.  National news media picked up the story. That’s how Russ Knocke’s quotation landed in The Atlanta Journal-Constitution.  If his words reflect Republic’s honest concern, toxic coal ash will not be dumped in Coastal Georgia.


Otherwise, in our rural corner of Georgia, we would say Republic’s spokesman didn’t just step in “it.”  He tracked it all over the house. 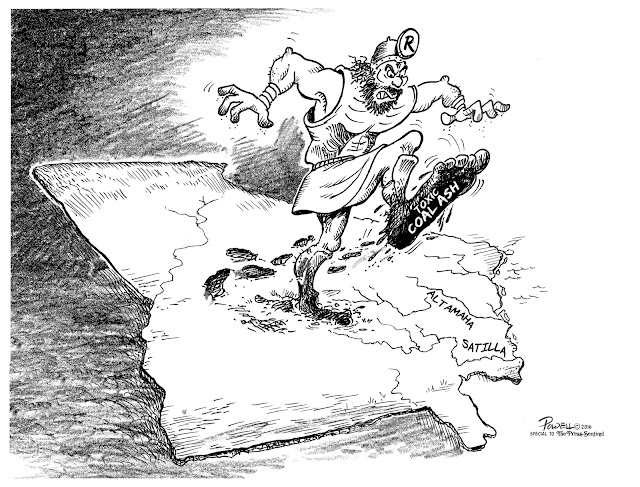