If America can put a man on the moon, we can solve coal-ash crisis

When Marjorie Vines was scuffing her bare toes through the sandy lanes of Putney—back in the late 1920s—outer space was the last thing on her mind.  But when the Soviet Union launched Sputnik in 1957, my mother was shaken awake along with the rest of America.  Then came JFK’s man-on-the-moon challenge.  Space talk became a part of the chatter around our supper table in the tiny kitchen in back of my dad’s funeral home.
About 20 years after Col. John Glenn’s 1962 globe-orbiting flight, I told the famed astronaut how my mother made her three children stop playing and huddle around a fuzzy black-and-white Majestic TV to watch him make history.  Mother was right: We needed to witness an event which would shape the world’s future.
As a guest of Congressman Lindsay Thomas, Ohio’s Sen. Glenn was in Wayne County, testing a bid for America’s presidency.  The senator laughed at my childhood story.  He never made it to the White House, but John Glenn and a host of other astronauts did more than just open the door to outer space. 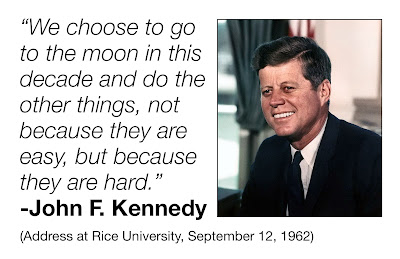 These men and women opened our minds by demonstrating that once-thought-impossible dreams can, indeed, become true.  Glenn and the original astronauts are now dead, but their inspiration should still be alive. When wizards focus on innovation, the possibilities are unlimited.  That is why I will never give up on the belief that, with the right commitment, industry and our environment can coexist in healthy accord.
That brings me to our current toxic coal-ash crisis.  I appreciate the value of cost-conscious management decisions.  However, I have learned—over 45 years of operating multiple businesses—the consequences of the old adage:  Penny wise, pound foolish.  Taking the cheap route can become the most expensive in the end.
Republic’s Broadhurst Environmental Landfill might offer the lowest short-term cost for disposing of toxic coal ash, but the long-term danger will be too expensive for future generations.  I am no rocket scientist, but what about these alternatives?
1.     Industries creating toxic coal ash should deal with it without creating problems for others— i.e., Wayne County and Coastal Georgia.  If the geology beneath the coal-fired plants is adequate and not porous such as Broadhurst, build lined containers on site.  The communities which have benefited from the employment and ad valorem taxes related to coal-burning industries should shoulder the negative side of the equation, too.
2.     Why not let the railroads profit from hauling the toxic coal ash back to its origin?  Old coal mines would be less risky than dumping toxic ash on top of aquifers, in wetlands and in hurricane-threatened coastal regions.  The locations which have profited from the upside of coal mining should be first in line to deal with the downside.
3.     Just as in real estate, the three most important factors in siting landfills are: location, location and location.  So many of you believe what I contend: Put toxic coal ash in places where water is nowhere near.  For example, Republic operates a massive landfill in a Nevada desert.  Why not put toxic coal ash there? Republic could be a national hero.  Yes, the transportation would cost more. But if you could ask our great-great-great-grandchildren, I believe they’d be grateful for the added protective investment.