Money is root of our dangerous landfill mess

A guiding principle of reporting is “follow the money.” If you peel back the layers of most any questionable situation, money is usually at the core.  Today’s rift with Republic Services goes back to the early 1990s and the first Broadhurst landfill operator.
Addington, a Kentucky-based mining company, approached our Wayne County commissioners with a money-making idea: a regional landfill.  If our elected leaders would allow the concept, the county coffers would brim with easy income.  “Manna from heaven” must have been the commissioners’ cha-ching reaction.  Who could imagine—back then—what would happen in 2016: a modern-day David-and-Goliath clash?
The next step was to get Georgia’s Environmental Protection Division (EPD) to approve the piney-woods site.  Uh-oh.  A March 15, 1993, letter from geologist Dennie Perriello raised a red flag.  The proposed typography, in the long-gone sawmill community, was too wet, too porous to justify dumping potentially dangerous waste in the wetlands.  You would have thought the project would have skidded to a stop.
No, no.
Enter enough money to hire the “right” engineers and lobbyists to convince the EPD that a few modifications would make the concerns evaporate.  Our rearview mirror reflects two things:
1. Addington had deep-enough pockets to remove the temporary roadblock.
2. Our commissioners couldn’t resist the promised-windfall, we’re-saving-our-taxpayers’-money bait.
Before long, Mount Trashmore began to rise above the pines, just west of U.S. 301 South.  There was talk of harnessing the landfill’s methane gas to fuel existing and new industry.  Did that claim ever yield anything? No, but Addington struck gold when it sold the landfill to Republic Services, America’s second-largest waste-management company.
And who owns about 30 percent of Republic?  Bill Gates. The world’s richest man loves landfills. He also holds a sizable stake in Waste Management, the nation’s largest trash handler.  Garbage is loaded with things people don’t want, but it is also laced with mega money.  Other people’s trash truly is a treasure on Wall Street-driven bottom lines.
So after Republic bought the Broadhurst Environmental Landfill, its representative went to our county commissioners with a 2005 landfill version of Let’s Make a Deal.   The pitch was for Wayne County to “streamline and clean up the clutter in the old agreement,” focusing on—in the new 50-year contract—the money which could be saved and made for Wayne County. 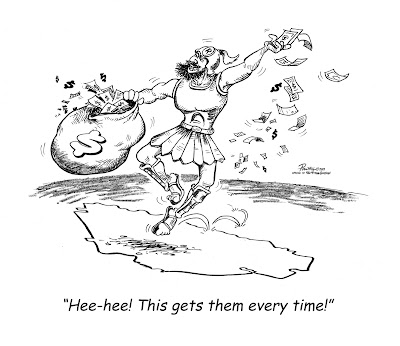 Gulp, we bit the bait—again.
Everyone—seemingly—was whistling “all the way to the bank.”  And then comes January 2016. Yes, Republic had whispered in a few commissioners’ ears something about coal ash coming to Broadhurst.  Coal ash?  What’s that?  “Oh, it’s more money for Wayne County” must have been the answer.  Did the public know about this?  No, not until Central Virginia Properties, LLC (an unknown Republic subsidiary) filed for the now-infamous wetlands-destroying permit from the Corps of Engineers.
And that’s when toxic coal ash hit the fan and blew concern and controversy all over Coastal Georgia.  Now, the behemoth waste conglomerate’s sneaky move has given Republic’s image a black eye.  So what does this multibillion-dollar, Phoenix-based outfit do?  Its wallet opens, and charitable donations start to flow with the not-so subtle message: “See, Wayne County, we really do love you.”  All the while, eyebrows should be arching, while remembering the old line: “Do me once, shame on you.  Do me twice, shame on me.”  I can’t help but think about how Native Americans were tricked into giving up Manhattan for a chest of trinkets.
If you have followed the money trail—from the beginning—your shouts should be, “No, no!”