Roscoe’s puzzle is a chapter in Wayne County’s history

If Roscoe Emory Dean Jr. was anything, the former state senator and gubernatorial candidate was a puzzle.  Make that an often-misunderstood puzzle.  Now that he’s gone, a team is trying to locate and snap into place all the pieces of that complex and colorful puzzle—for history’s sake.  And unless you climb the 23 wooden stairs of the iconic Kicklighter Building on Cherry Street and survey the jumbled room-after-room of pieces, you have no idea of what a challenge that task is going to be. 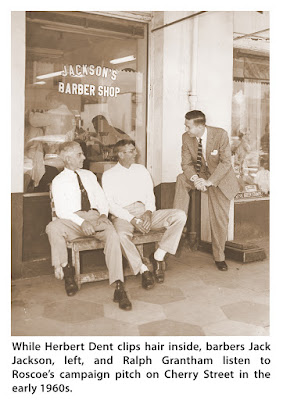 As a history buff, I couldn’t fathom the idea of Roscoe’s memorabilia getting buried in the Broadhurst landfill.  As a former chairman of the Richard B. Russell Foundation, I knew where to find help.  After Roscoe’s funeral, I contacted the archive professionals at the University of Georgia’s Richard B. Russell Library for Political Research and Studies to test their interest in the former Sixth District senator.  Before I could finish the question, director Sheryl Vogt said, “Yes!”
On April 27, Sheryl and her associate Mat Darby, the library’s head of arrangement and description, drove a large van down from Athens.  Surveying the piles of rubble, she thought what I had been thinking, too: “Roscoe must have never thrown anything away.  One van won’t haul all this.”
But before I get ahead of myself, I need to start at the beginning.

When a new owner took the deed to the two-story brick building, Roscoe walked away from more than 1,000 books, hundreds of photographs and 60 years’ worth of accumulated materials.  To the average eyes, it looked like trash.  But to historians, it was a gold mine of irreplaceable documents.
The bad news is that about four truckloads did get hauled off.  The good news is those loads were taken to Wayne Service Center for recycling.  That’s where staff member Angie Brantley spied some too-good-to-be-lost photographs, and she scrambled to save everything possible.  I discovered Angie’s actions by happenstance in a visit with Dr. Lanier Harrell and his neighbor, John Benner, who is the service center’s director.
During that initial clean-out, Eric Denty and Lynn Rice of The Press-Sentinel hustled to Cherry Street to recover a few items and then called me.  And then I got an email from Harry Bennett, who had befriended Roscoe in his waning years.  Harry had a treasure trove of the senator’s memorabilia.  Just as Angie had offered, Harry wanted what he had to be archived, too.
Next, reporter Derby Waters overheard my conversations at the newspaper and said, “I can get a key to the building.  Do you want to go take a look?”  His cousin, Patricia Mallard Slovacek, is the second owner after the Dean family.  Last week, Patricia greeted Sheryl, Mat, Derby, Eric and me while sharing her enthusiasm for rescuing Roscoe and his family’s history from its previous landfill fate.
Sheryl and Mat are coming back soon for more loads.  The Russell Library is the absolute best place for Roscoe’s artifacts.  I have asked, and Sheryl agreed to send a videographer to Jesup to record oral memories of Roscoe Emory Dean Jr.  Whom would you like to see interviewed?
Whether you liked him or not, Roscoe’s colorful and complex life is a piece of Wayne County’s historical puzzle.  Before the memories are forgotten or lost, let’s snap the pieces into place. 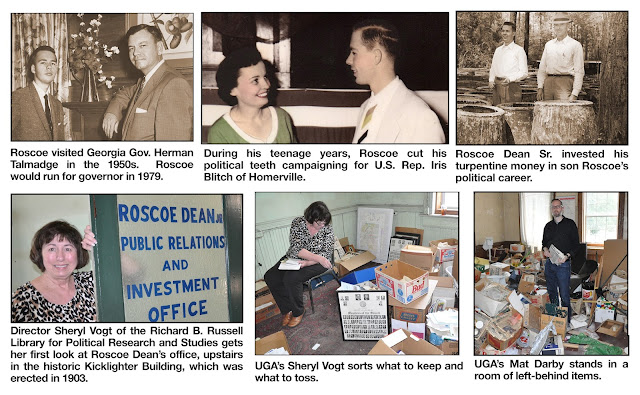