Because I usually travel during after-work hours, the Baxley business is closed when I drive by on U.S. 1 North.  Regardless, I glance to see whether I can catch a glimpse of its proprietor.  I hadn’t seen him since 1976, when I left the St. Simons unit of the Georgia Air National Guard. 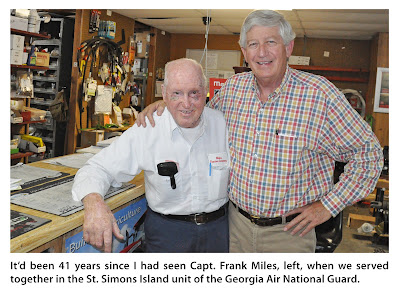 June 6 was different.  I was on the road early, so I walked into Miles Tractor Company and asked to speak to Capt. Frank Miles.  He’d just left to run a few errands in town, but I got to meet his wife, Loretta.  The next day, I stopped again.  And there he was.
It’d been 41 years since we’d last talked.  But within minutes, we picked up a decades-old conversation.  And it was as if Santa Claus had slipped down the chimney on the cusp of summer, delivering a you-can’t-buy-this-anywhere gift.
There’s a story in every life.  In the case of Frank Miles, there’s probably a book on the honorable way to live for 87 years.  Here’s a snapshot:
§  Born on Feb. 15, 1930, in the teeth of the Great Depression.
§  Grew up plowing a mule on his family’s farm.
§  Graduated from Appling County High in 1947.
§  After finishing two years at ABAC, bought a Farmall Super A tractor on credit.
§  Planted sweet corn and hauled it to Atlanta to sell, but crop was a financial disaster.
§  Joined the Air Force in 1951 so he could send money home, keeping the promise to his daddy to pay for the tractor.
§  Fought in the in the Korean War for 18 months.
§  Entered the University of Georgia in 1955.
§  Ran a campus-laundry route to supplement his $110-per-month GI Bill income.
§  Through ROTC, earned the rank of second lieutenant.
§  Graduated in 1957 and became principal of the old Ten Mile School.
§  Taught vocational-agriculture at Odum High School in 1958-1959.
§  Rented a room from Ben Pearce’s mother.
§  Wayne County Superintendent Hershel Collins released him from contract to return home to teach and help his parents.
§  In 1960, married Loretta, who was introduced to him by his sister, Christine.
§  Six children—Jana, Eddie, Greta, twins Don and Jon, and Brack—presented Frank and Loretta with eight grandchildren.
§  Lives in his grandfather’s built-in-1887 house.
§  House is shaded by massive oaks planted in 1900 by his Uncle Elzie Miles.
§  Longtime active deacon in Ten Mile Baptist Church.
§  Purchased tractor dealership in 1969.
§  In 1972, founded local Young Farmers organization, which quickly became Georgia’s largest chapter.
§  After 30 years, retired from Air National Guard in 1984.
§  After teaching 39 years, retired in 1995.
But after all this, Frank Miles is far from retiring.  Daughter Greta commutes from Waycross to keep the company’s books.  Loretta is the general manager, and son Brack is the sales manager.  His niece, Sharon Foster, is behind the parts counter. Grandson Preston Miles is on the team, too.  Frank’s desk is still piled high with work.
Back in our Air National Guard days, I saluted Capt. Miles in respect of his rank.  Today, I salute my friend for being a sterling role model for all men on the eve of Father’s Day. 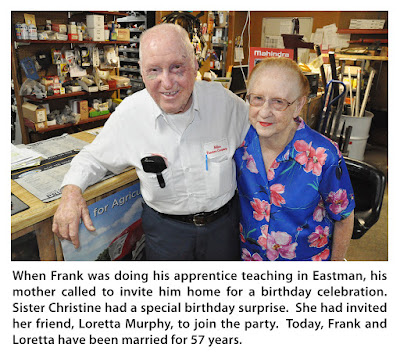 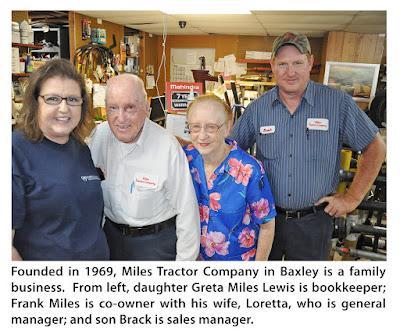 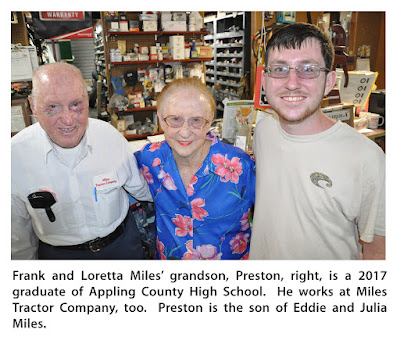