Bulldogs don't have to bleed red and black

You don’t have to bleed red and black to be a bulldog, but die-hard Georgia Bulldog fans usually do.  This isn’t about college football.  It’s about the legend of the bulldog’s jaws.  I’ve always heard a bulldog’s jaws are designed so that it doesn’t have to turn loose to breathe.
I like that.
If you are committed and clamped down, you can still breathe.
I am convinced a human bulldog helped to save the free world in our fight against Nazi dictator Adolf Hitler.  As Britain’s pugnacious prime minister, Sir Winston Churchill locked his bulldog-like jaws down and growled for his compatriots to never, never give up.
If you haven’t seen the movie Darkest Hour, don’t delay.  Even if you don’t have the slightest hint of gray in your hair, you’ll be able to relate to the importance of what that “bulldog” did during the darkest hours of World War II to galvanize his people.  The film would be an excellent academic experience for today’s teenagers.
Sunday night, March 4, we’ll know how the Academy Award-nominated film will be honored.  Actor Gary Oldman mastered Sir Winston’s demeanor and speech. During my viewing—as the end credits rolled—chills tingled over me, as spontaneous applause erupted in the dimly lit theater.
Even from his grave, Churchill’s words are still having an impact.
Consider these quotations:
§ “Success consists of going from failure to failure without loss of enthusiasm.”
§ “When you’re 20 you care what everyone thinks, when you’re 40 you stop caring what everyone thinks, when you’re 60 you realize no one was ever thinking about you in the first place.  You have enemies?  Good.  That means you’ve stood up for something, sometime in your life.”
§ “Everyone is in favor of free speech. Hardly a day passes without its being extolled, but some people’s idea of it is that they are free to say what they like, but if anyone else says anything back, that is an outrage.”
§ “In the course of my life, I have often had to eat my words, and I must confess that I have always found it a wholesome diet.”
§ “We contend that for a nation to try to tax itself into prosperity is like a man standing in a bucket and trying to lift himself up by the handle.”
§ “An appeaser is one who feeds a crocodile, hoping it will eat him last.”
§ “A lie gets halfway around the world before the truth has a chance to get its pants on.” 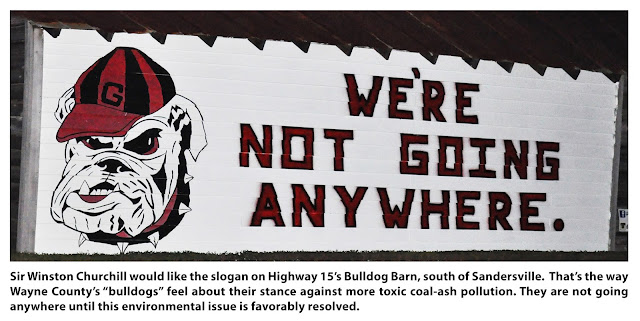 § “To each there comes in their lifetime a special moment when they are figuratively tapped on the shoulder and offered the chance to do a very special thing, unique to them and fitted to their talents.  What a tragedy if that moment finds them unprepared or unqualified for that which could have been their finest hour.”
§ “Fear is a reaction.  Courage is a decision.”
Wayne County is blessed with a legion of “bulldogs”—not all wearing red and black—who have made a decision. They have the courage to clamp their jaws on a commitment to protect our environment.
I like that.