Ignorance is bliss.
What you don’t know can’t hurt you.
Out of sight, out of mind.
How many times have you heard those sayings?
There’s something to be said about wearing mule blinders.  What if all you had to do was plow through life—looking at only what’s in front of you—so you could ignore everything else?  Ignorance could be blissful.  Not knowing can also be dangerous.
We’ve learned that the hard way in our rural corner of Southeast Georgia, but we aren’t alone.  Mega landfill companies—across America—are famous for zeroing in on communities such as ours.  In the early 1990s, we were blissfully ignorant about the downside of inviting a regional landfill into Broadhurst.
Your mama was right: “If it sounds too good to be true, it probably is.”  Make no mistake.  The money sounded good, very good.  But what we didn’t “know” about were the unintended consequences, such as how millions of tons of toxic coal ash can poison our environment.  Call us what we were on that subject: ignorant. And put me on top of that uneducated list.
There was a time coal ash wasn’t a typical conversation topic, but no longer.  Today, the proverbial mule blinders are off.  People are paying attention.  Elected officials are being asked for stronger protective laws, while asking why Georgia is a coal-ash dumping ground for the Carolinas and Florida.  Follow the money, and the answer to that question is anything but blissful. 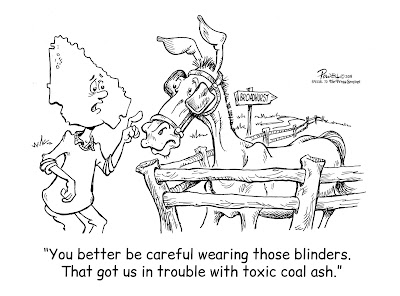 Few days pass that I don’t get a call, a letter or an email about coal ash. The following email is an example:
“Feb. 3, 2018
My name is Shannon, and I am currently an Emory University senior studying the effects of coal ash storage on local Georgia communities.  I’ve been following the story of Jesup for about a year and a half, and before I go any further, I just want to say how incredible the work of The Press-Sentinel was/is and how much Jesup has influenced what I study (environmental economics and sustainable development) and my perceptions of waste management.
I’m contacting you directly about the article recently wrote about Homer, Ga.  Homer has come up quite a lot in my research about Jesup because of their own coal ash storage issues.  However, there is substantially less written online about Homer, and I am having trouble finding out about current community activism in Homer.
Do you know anyone in Homer who is currently writing about the issue, or involved in activism about coal ash in the town?  I would love to talk to someone about their town’s story and help in any way in terms of general access to information about what they are facing.  Coal ash is so dangerous, and part of that danger is that most people don’t know it exists, let alone that fossil fuel corporations are exploiting and slowly poisoning so many communities with it.
Thank you for taking time to read this email, and I hope to hear from you.”
Shannon’s email shows why coal ash is no longer “out of sight, out of mind.”  She agreed for her message to be printed. I am not publishing her email address, but I will forward your comments to her.
Coal-ash dumping and storage aren’t just a Wayne County or Georgia problem.  Without wearing mule blinders, you can see this is a national and global issue.  This is 2018. What we don’t know can and will hurt us.