From short-order cook to United States senator, former governor Zell Miller packed a multitude of experiences into his 86 years.  When we last visited, I asked, “What do I call you, Governor or Senator?”  “Zell would be good,” he said, “but I prefer Governor over Senator. My time in Atlanta was more special than my time in Washington.”
Thinking about his answer stirred up six signature memories of the mountain man from Young Harris:
§  In 1989, Lt. Gov. Zell Miller called, “Hey, Dink, I hear y’all just bought the Hiawassee paper.  You know, I used to be editor.  How about selling it back to me?”  “Governor,” I said, “we are in the business of buying papers, not selling them.”  Over the years, he kept thanking me.   He’d repeat my response and say, “You saved me a lot of time and money.”  And we always laughed.
§  In 1991, the Georgia Bulldogs were about to play the Arkansas Razorbacks in Shreveport’s Independence Bowl.  During a pre-game lunch, we were sitting at a tiny table with Zell and Shirley Miller.  “Governor,” I asked, “what are some of your plans for the future?”  He zipped back, “Two things: Get the lottery passed in Georgia and help get my friend Bill Clinton elected president.”  A few years later, I admitted to Zell that I thought neither of his goals would ever happen.  I can still hear him laughing. 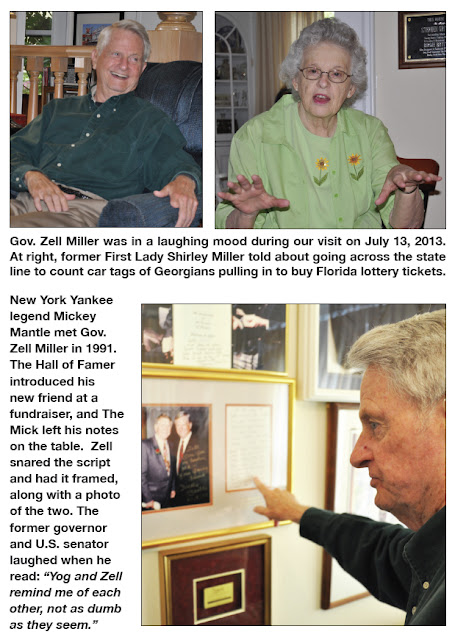 §  In 1994, Gov. Miller asked me to serve on the Georgia Telecommunications Commission.  Before I was sworn in, I tried to persuade him to move its headquarters from Atlanta back to the University of Georgia.  “Governor,” I said, “the state won’t have to buy any expensive Atlanta real estate if you put Georgia Public Broadcasting back on the Athens campus.”  Zell shook his head.  “Well, Governor, how about considering building a high-tech campus on Hwy. 316 between Athens and Atlanta?”  Zell stared at me and said, “We are going to put the building next to Turner Broadcasting in Atlanta.”  If he hadn’t been grinning, his words would have singed my eyebrows.  He fired back, “Now, do you want to be on this board or not?”  In time, we’d laugh about that, too.
§  In 1998—on my 50th birthday—we were sitting toe-to-toe, Zell’s pointy cowboy boots touching my tassel loafers. We were flying to Albany on an economic-development mission.  I knew his answer, but I asked any way: “Governor, who’s your favorite country music artist?”  “George Jones,” he announced over the hum of the King Air’s twin engines.  “When George sings a song, it has been sung.”  Twenty years later—when I hear The Possum on the radio—I smile.
§  In 2013, Larry Walker and I decided to visit a trio of Georgia legends: Bert Lance, Bobby Lee Cook and Zell Miller. Make that four.  Shirley Miller is a legend in her own right.  Sitting in the stone house Zell’s mother built with her hands, the Millers regaled us with stories.  The loudest laughs came when Zell showed us a note former New York Yankee Mickey Mantle had scrawled on a cocktail napkin, just before introducing the Georgia governor at a fundraising banquet.  The punch line was: “Yog and Zell remind me of each other, not as dumb as they seem.”
§  In 2014, Zell wanted to see the exhibit of former Speaker of the House Tom Murphy at the University of West Georgia.  I volunteered to “fly” the Millers to Carrollton in my F-150 pickup.  On the way, Zell and Shirley told how they went to Florida and counted car tags, as Georgians crossed the state line to buy lottery tickets.  Laugh-filled memories filled the 12-hour day, and we celebrated the excursion with supper at Poole’s Bar-B-Que in Ellijay.
§  In 2018, when I heard of Gov. Miller’s death, I scrolled through old emails. My friend always ended his messages: “Hope you’ll come back to visit.”
I wish I could.