There's nothing part-time about politics

Babe Davis went to his grave thinking I was going to run for governor.  When I’d take 4-year-old Eric to the Babe Davis Mighty Mite Field, he’d drape his big arm over my shoulder and say, “Tell the truth.  I know you are going to run.”
“Nah, Babe,” I’d say.  “Where’d you hear that?”
With the back of his other hand, he’d wipe the tobacco juice off the corner of his mouth.  And then the old major-league pitcher would drawl, “I just know.  You’ve already got $10 million in your campaign account.”  That was a good 35 years ago, and I can still hear his deep-belly, gravelly heh, heh, heh.
And when we relocated to North Georgia, Babe was convinced I was expanding my political base. No matter how hard I tried to say otherwise, Babe wasn’t buying it.  However, I did once toy with the idea of running for state senator.
On a Monday afternoon, I had a visitor to 252 W. Walnut St.  Sen. Riley Reddish said, “Very few people know, but I am not running for re-election.  Qualifying closes Wednesday.  If you’ll go to Atlanta and sign up, you’ll probably be unopposed.”
When our children were tucked in, I told my wife about Riley’s visit.  Without hesitation, Pam said, “We have a family.  Our children are growing up fast.  You are building your business.  Do you really think you have time for that?”  In about three hours—after Riley’s offer—my ballot-box itch was cured. 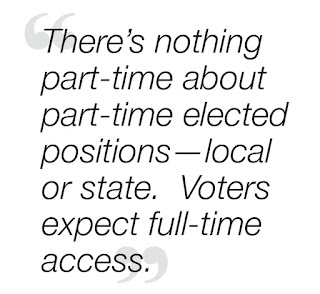 Babe would have liked the possible political springboard, but I knew the answer to that.
The next morning, I called Riley: “Thanks, but no thanks.”
Patterson’s Earl (Frog) Echols hopped to Atlanta and became the Sixth District’s senator.
And all that had just about been lost in my cobwebs, until I heard Rep. Chad Nimmer’s news. The Pierce County timberman has been an up-and-comer in the Georgia House, but I’m not surprised he has shifted gears with his personal priorities.
There’s nothing part-time about part-time elected positions—local or state.  Voters expect full-time access.  I’m fortunate my then-young bride tugged my head out of the campaign clouds.
Who will take Chad’s place?
Three folks want the job—Republicans Steven Meeks and Franklin Rozier, along with Democrat Greg Odriscoll. More power to them.  It takes a special breed of cat to make a commitment to politics.   Steven knows his way around the Gold Dome.  Do you think he had a Riley-kind-of-visit from Chad?
Even though I pay plenty of taxes in the district, I can’t vote.  Nonetheless, I have strong opinions about who represents us.  It’s so easy for officials to get sucked in and be compromised by deep-pocketed contributors.
Those big check-writers don’t give their money because they necessarily like you.  They expect their dollars to influence how you vote.  That’s why voters should know who’s contributing to whom.  And by paying attention, you’ll see how the sausage-making of laws typically works in Atlanta and Washington.
Back when Babe was cajoling me, I didn’t have a full grasp of the trappings of politics.  Now, after 47 years of putting ink on paper, I am not so much a cynic as I am a realist.
Rep. Chad Nimmer has done a nice job.
Who should replace him?
If I could vote, I would choose Screven farmer Steven Meeks.
My only request of him—and any other candidate—would be: “Don’t be pulled so deep into the pockets of lobbyists that you can’t see what’s best for our corner of the state.”