(As the latest edition of The Press-Sentinel was going to press, I was in Alexandria, Virginia, near Washington, D.C.  The following is my April 24 testimony at the Environmental Protection Agency’s [EPA] public hearing on its proposed federal rule changes on coal ash.)
Good afternoon.
Thank you for this opportunity.
My name is Dink NeSmith.  This is my 47th year in the newspaper business.  My hometown is Jesup, Georgia.  We are facing the risk of having millions of tons of toxic coal ash dumped in a privately owned 2,300-acre landfill which is 10 miles from our courthouse.  We are not alone in Southeast Georgia.   Deep-pocketed companies traditionally target scores of small, rural communities.
We become Sacrifice Zones, as those giant corporations dump on us to get rid of dangerous and noxious waste that they don’t want.  Toxic coal ash is a prime example. Simple logic decries, “You don’t solve one problem by creating another.”
Do I need to mention the stranded Poop Train that stunk up the tiny town of Parrish—population 982—in rural Alabama?  Would you have allowed that repulsive nightmare to linger in Washington for more than two months?  We don’t deserve to have our communities sacrificed by the callous greed of others. 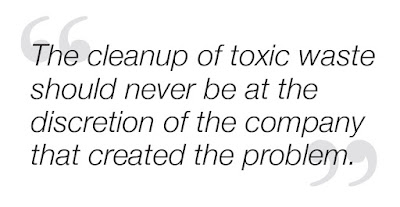 With its enormous size, the Broadhurst Environmental Landfill in Jesup could become one of the largest—if not the largest—toxic coal-ash dumps in America. Until Republic Services Inc. withdrew its plans in 2017, our community was destined to receive—every day—100 rail cars loaded with 10,000 tons of toxic coal ash.  In five short years, we would have had a toxic mountain of more than 18 million tons of coal ash.  That is still a possibility.  Your proposed anything-goes set of rules will be devastating to our community and hundreds of others.
There’s no nice way to say it. If you throw out today’s protective coal-ash guidelines, communities such as Jesup will become environmental prostitutes with the big-moneyed polluters serving as it’s-all-about-the-money pimps.  Your action or inaction makes us a David up against a massive army of Goliaths.  That’s why we depend on you—the EPA. Americans need you to stand up for our environmental safety.
The long list of proposed rollbacks on federal coal-ash rules is, in a word: scary.  In another word: ludicrous, if your middle name is really “protection.”  If you are listening to the people—beyond the powerful industrial lobbyists—you would be hearing: “What? This can’t be!” The cleanup of toxic waste should never be at the discretion of the company that created the problem.  Putting the fox in the henhouse to protect the chickens is a horrible idea!
The first two things a plumber must learn are:
1. The hot goes on the left.
2. The stuff must run downhill.
The Atlantic Ocean and the coast’s sensitive estuaries are 40 miles downhill from the Jesup landfill. When another leak or spill occurs—and that will happen—the poison will spread throughout the massive Altamaha River watershed that drains one-third of Georgia.
The landfill is situated in and around wetlands which empty into the Altamaha and Satilla rivers.  Both flow into the Atlantic.  Another alarming fact is that the landfill sits atop the Floridan Aquifer, a vital drinking-water source for millions of people in South Georgia and North Florida. You already know the poisonous heavy metals in toxic coal ash.  Ask the people of Flint, Michigan, what part of lead in their drinking water isn’t hazardous to their health.
Take a moment.
Look at this no-thicker-than-a-nickel piece of plastic.  This is supposed to be our assurance that our water is safe from toxic coal-ash pollution for 10 years … 50 years … 500 years … forever?
Really?
Your agency should never allow landfills such as ours to be located in waterlogged environments.  Our safety, our peace of mind and potentially our economic well-being have been sacrificed.
We look to agencies—state and federal—to protect us.  If these governing bodies don’t, who will?  You have a responsibility to remain the Environmental Protection Agency and not become the Environmental Pollution Agency.
If my grandmother were here today, she’d be 118, and she’d say, “You’re about to create a ‘mell of a hess.’”  Think about it.  And think about what Dr. Norman Vincent Peale said, “There is no right way to do a wrong thing.”  What you are proposing is, in a word: wrong.
Thank you for listening.

Dink NeSmith
Chairman of the Board
The Press-Sentinel
Jesup, Georgia
dnesmith@cninewspapers.com 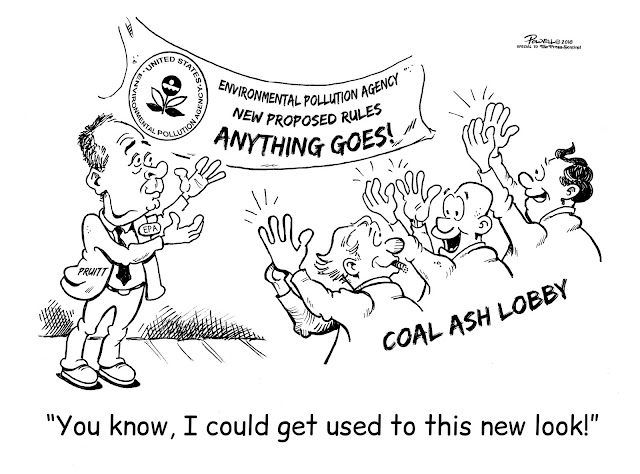