Proud llama papa has an announcement

Since we’ve never officially met, please allow me to introduce myself.  My full name is Baby Llama Bean, but you can just call me “Bean” for short.  That’s what most folks do here on the NeSmith farm.
If I sound a little like a braggadocio, please forgive me.  First-time fathers can get that way, and I’m about to pop with pride.  My barnyard sweetheart, Georgette, delivered a surprise in between all those spring gully-washers last week.
The little one is a beauty.  It has fluffy white fur, with a brown patch on its back, just like me. I overheard my neighbor, Maggie the Mule, tell her spotted-donkey boyfriend, Spanky, “Why, it’s all legs, ears and long eyelashes.”  I’ll take that as a compliment.
Across the barbed-wire fence, Otis is pouting.  He’s the man among his harem of three miniature donkeys.  He and I had a bet about whose offspring would get here first.  Jenny is really showing, and Otis was just sure that he’d be braying and passing out the hay-rolled cigars first.
He’ll get over it, maybe.
Everybody is asking, “Well, what is it?  What is it … a boy or a girl?”
That’s a good question.
I’m a little embarrassed to say, “I don’t know, either.” 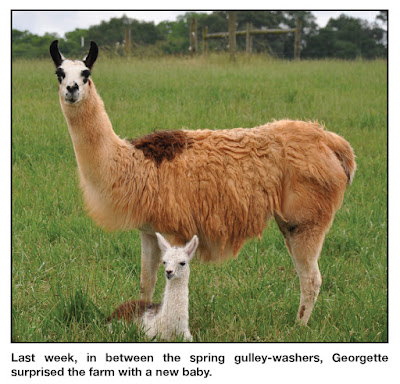 Why?
Don’t you know about llamas?  When riled, we could-be cousins of a camel can spit a city block.  And when a llama aims its ears backwards, watch out.  A big old wad of nasty is about to get hurled at you.  I’ve launched a few yucky missiles myself.
I know Georgette loves me, but she ain’t letting me near her or our baby … yet.
But I don’t feel too bad.  She won’t let the farmer close, either.  I’ve watched him try, but Georgette’s ears just flatten against her pretty head.
Let me digress.  Normally, Georgette is a sweetie.  She’s famous on the farm for leaning over the fence to give visitors a smooch.  Now, that girl will plant her velvet lips in a flash.
But things aren’t “normal” right now.
That’s why the farmer started walking backwards, watching Georgette, with every step.  She had started pawing the fescue like an angry bull.  Once—on a full moon—I saw her rear up and flash those spear-like hooves at a night-marauding coyote.  That bad boy tucked his hairy tail and skittered back under the fence.
No, sir, I’m not making her mad.
Neither is our farmer.
But he did ask me, “What are y’all going to name it?”
“That’s easy,” I said.
“If it’s a girl, we’ll call her Dolly Llama.”
“If it’s a boy, his name will be our Dalai Llama.”
I wish you could see Otis.
He can almost walk to the pond on his poked-out lips.
(Since I don’t have internet connection at the barn, you can reach me at dnesmith@cninewspapers.com)