Chautauqua is America’s ‘heart of the watermelon’

In a world gasping for a breath of civility, I woke up Aug. 5 in a southwestern New York oasis, not too far from Niagara Falls.  Strolling down winding red-brick paths, shaded by a canopy of trees, I heard voices—with divergent views—spilling from wraparound verandas and upstairs porches.  But what I didn’t hear were angry tones.  Other than applause, the loudest commotion came from gaggles of kids, cackling as they pedaled by on their bikes.
For the first 24 hours, I wondered whether I was dreaming.  And then I learned more about this place that’s just below Canada and very near Lake Erie.  The Chautauqua Institution is celebrating its 144th anniversary.  In 1905, President Theodore Roosevelt called it “the most American place in America.”
Now I see why.
With roots in Methodism, the Institution has grown into a smorgasbord of religions. Every morning, there’s a worship service in a 6,000-seat amphitheater, but it’s not all about religion.  Walking around the fountain in historic Bestor Square, our host pointed out Chautauqua’s four pillars etched in the statue: “Knowledge, Music, Art and Religion.”  It is a mecca of lifelong learning squeezed into a nine-week summer season.
Everywhere you turn on the 750-acre pedestrian-oriented campus, you can feel a tug to learn more about the history of this place perched on the banks of 13,000-acre Chautauqua Lake. (Visit chq.org.)  Just listening to passersby, I was—as a first-timer—in the minority.   I heard countless octogenarians and older bubbling about coming since childhood.  Even the dogs on leashes were cordial to each other. 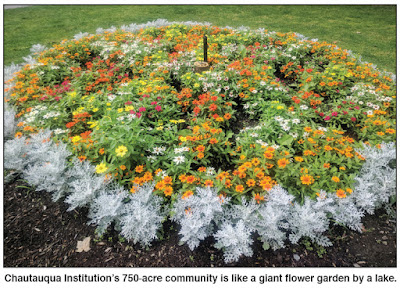 The curriculum ranges from digital wizardry to pottery to, well, pick a subject.  You can golf, sail or attend an opera, a concert, a lecture or a movie.  I liked visiting the bookstore and the library.  Sitting on a park bench with an ice cream cone was a vacation in itself.
A Chautauqua favorite is discussions on the porches of the Victorian, Queen Anne and Craftsman-style houses.  Many date back to the 1800s.  Others were built to look historic.  Some of our chats were on the porch, but most were around a long kitchen table.
On the farm, we’d call those conversations “the heart of the watermelon.”  Everything about Chautauqua is ripe with uplifting experiences.  And just like that luscious center of a watermelon, I savored the opportunity to listen to seven other adults—with varied backgrounds—talk about their lives.  In the diverse group, these things stood out:
*Civility ruled spirited conversations.
*Laughter punctuated almost every topic.
*Four couples had 193 combined years of marriage.
*Departing handshakes were followed by hugs.
Among the parade of speakers, I picked famed cellist Yo-Yo Ma as the “heart of the watermelon.”  Born in Paris to Chinese parents who migrated to New York, Yo-Yo’s Grammy-winning music is stringed magic.  But his words were just as magical.  He brought 6,000 to their feet with both.
World War II’s Gen. George Marshall described a leader as a person who exerts an influence that makes you want to do better than you thought you could.  Yo-Yo’s charisma radiates that kind of hope.  His keen vision for the world is wrapped in compassion and common sense, inspiring others to do their best, too.
Chautauqua is like walking in a flower garden. Color is bursting everywhere, as is laughter.  That’s why I adopted Louis Armstrong’s “What a Wonderful World” as my sound track for our eight-day visit.  With each step I could hear Satchmo’s raspy voice singing: “Yes, I think to myself … what a wonderful world … Oh, yeah.”
Chautauqua is the heart of America’s watermelon.
Oh, yeaaaaaaah. 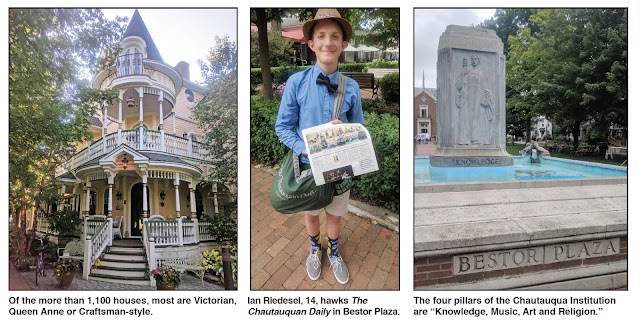