What kind of legacy do we want to leave behind?

Archie Bunker made a fuss about where he sat.  The politically incorrect TV character would harangue anyone who dared to plop down in his chair, especially his son-in-law, “Meathead.”
I don’t have a chair.  But wherever I sit, I want something to read within reach.  Before breakfast, I’ve read several newspapers.  And before I turn out the light at night, I’ve read pages in a book or two.  In between early and late in the day, magazines often fill the gap.
The PROGRESSIVE FARMER is a good example.  It’s always good for helpful information.  After scanning the cover, I turn to the “Handy DEVICES” page.  Readers such as Gene Vitek of Stillwater, Oklahoma, send in tips for making chores easier on the farm.  Gene’s diagram is how to reroute an electric fence under a gate—using a piece of rubber hose—so that he doesn’t have to unhook the wire every time he drives through.  Good idea, Gene. 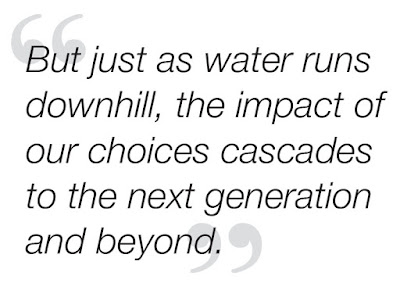 But if you don’t have a need for those kinds of suggestions, there’s always something useful on the back page. “CORNERSTONES” is a collection of themed quotations. September’s subject was entitled “Legacy.”  That topic never strays far from my mind.  What kind of legacy are you and I leaving?  Our children and our grandchildren are watching.  Do our actions set examples for them to follow?  If we don’t care, how are we to expect them to care about the future?
Consider the words of David Brower, as published in The PROGRESSIVE FARMER: “We don’t inherit the earth from our ancestors; we borrow it from our children.”  Think about that, as it relates to what’s going on in our community right now.  Decisions we make or allow to be made affect us.  But just as water runs downhill, the impact of our choices cascades to the next generation and beyond.
Dumping toxic waste in and around our wetlands was never a good choice.  And we shouldn’t be tempted to use potential coal-ash-dumping fees as part of our solution to the county’s financial shortfall.  Consider this analogy.  As a man, would you force your wife or your daughter to become a streetwalker to bring in more money to balance your household budget?  Prostitution can be lucrative. “Whaaaat?” you howl.  “That’s ridiculous to even suggest such a thing!”
Of course it is.
Now hold that line of thinking.
The county is struggling with its lack of income and too many expenses.  Should we pimp our environment and risk our health by allowing Wayne County to be a dangerous-waste dump for short-term financial gain? “That’s ridiculous,” you say.
Of course it is.
That’s why we cannot be tempted to ignore the long-term consequences of shortsighted logic.
If you haven’t thought about it in that way, find a chair—but not Archie’s—and have a seat.  Think about the legacy we want to leave behind.   And ponder the words of David Brower: “We don’t inherit the earth from our ancestors; we borrow it from our children.”