Last-minute impulse takes us back to mid-1960s

By nature, I am a planner.  I keep a hefty to-do list while managing my old-school calendar.  I need that deadline discipline.  But then again, I can be impulsive.  That’s why I believe that if it wasn’t for the last minute, some of the best things would never happen.  Sept. 21 and the next two days are proof.
On an impulse, I called Marcus Waters in Warner Robins.  “Let’s go to the football game,” I said.  “Remember, we beat Baxley 67-0 our senior year.  Let’s see what the Yellow Jackets can do this year.”
In 1965, Marcus and Billy Cheshire were our quarterbacks.  Marcus went on to play at East Tennessee State.  The Seminoles gave Billy a Florida State scholarship. I got a free ride to the University of Georgia in the back seat of my parents’ Buick.
Fifty-three years after hanging up our Jesup High cleats, Marcus and I were sitting on the 50-yard line watching Jackets in black beat up on Baxley, 38-7.  Two rows back was our team physician, 91-year-old Dr. Lanier Harrell.  Of those present, I believe he would have the second-longest streak of attendance.  In 1949, Doc started coaching with Ben Park. He’s been an icon of loyalty ever since.
The probable first-place attendance award goes to a fan who sat behind Doc.  Born in April 1948, Patti Park was a tiny baby when her mother, Frances, started bringing her to games. Patti’s husband, Kenny Bryant, was on our 1965 team, too.  He and I were heavyweight guards, all 165 pounds each.  During halftime, Kenny, Marcus and I had a mini-reunion. 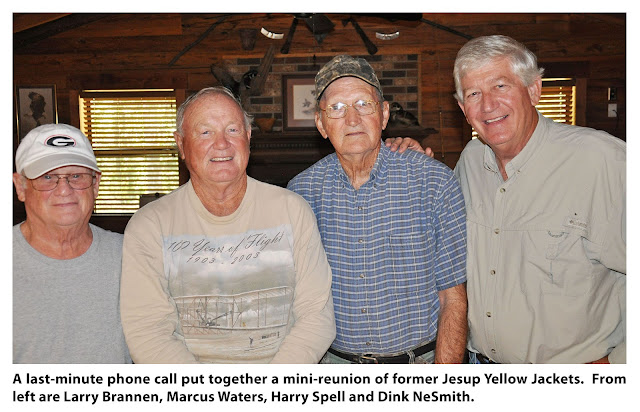 Maybe it’s our ages.  We might not recall what we had for lunch last Friday.  But with the flip of a switch, we’re back remembering play-for-play the 1965 game against Dublin’s Fighting Irish.  The year before, we had our hearts crushed in Laurens County.  We were driving for the winning touchdown, but a red-zone penalty pushed us back and into defeat.
Coaches Clint Madray and Ben Park had us pumped, ready for revenge our senior year.  I remember trotting through Jaycee Stadium’s gates.  Pregame electricity pulsed from both sets of stands.  A fog hovered over the turf, but it was gone by the time the final seconds clicked off the scoreboard: Jesup, 12, and Dublin, 0.
Now back to Saturday before last.
As Marcus; our teammate, Larry Brannen; and I were gearing up for the Georgia-Missouri kickoff, Marcus said, “I sure would like to see Harry Spell.”  With that impulse, I dialed Harry, aka “Foots.”  Within an hour, “Foots” was knocking on the door.  I can close my eyes and see Harry’s red—size 15—shoes churning around the track in the mile-relay race.
Over slabs of Alda Holland’s 10-layer chocolate cake, we kept an eye on the Bulldogs on TV, but the chatter was about 1964’s Coffee County game.  During halftime, Big Clint exploded over our sloppy play.  Roaring, he flung a cup of Coke.
Splat!
It soaked the back of Doc’s white shirt.
Oops!
But the Jackets rediscovered their stingers.  Paul “Jet” Conner scooped up two second-half fumbles and lumbered to the end zone.  Penalties nullified Jet’s touchdowns, but the Jackets rode home winners.
Sunday morning of our get-together was a winner, too.
Larry, Marcus and I replayed our growing up in Jesup.  We may be 70ish, but only our memories are that old.  As we drove away, I thought, “Here’s to last-minute impulses. We couldn’t have planned this any better.”