How addicted are you to your smartphone?

Look around.  Who’s looking back?  Odds are no one is paying any attention to you.  They are too busy scrolling through smartphone messages.
Consider yourself and your cell phone.
That’s what vitaminwater wants you to do.
Could you give up the use of your smartphone for 365 days?  If you couldn’t, you wouldn’t be alone.  If this digital addiction were a drug—say, crack, heroin or meth—there wouldn’t be enough rehabilitation facilities in America.  Coca-Cola Company, parent company of vitaminwater, has a contest to see who can go cold turkey for a whole year.
So what do you have to do to win the $100,000 grand prize?
There’s plenty of fine print in the rules. The first thing you have to do is lock up your smartphone and tablets.  That’s right.  Scrolling is out.  No social media.  Forget Facebook, Twitter, Instagram and such.  No texts.  No going to Google on your mobile device.  And you must agree to a lie-detector test at the end of the year.
But before you hyperventilate, relax.
The contest allows you to use your laptop or desktop computer.  And as a pacifier, you will be given an old-school, screen-less cell phone.  A flip-phone would let you call 911 or ask AAA to come fix your flat tire. 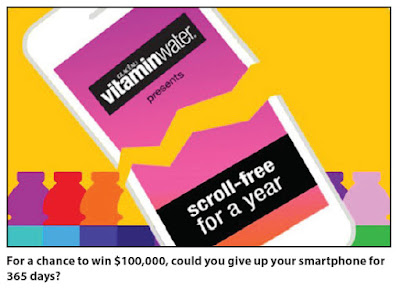 Giving up your smartphone is a big step toward winning the 100 grand, but there’s more.  I won’t go into all the details, but there’s some writing you’ll have to submit.  You must sell the contest committee on how you’d be using all that newfound time by giving up your smartphone.  If your originality, creativity and humor are better than everybody else’s, you just might be $100,000 richer in early 2020.
For a few minutes, after reading the article, I imagined the next year without my smartphone.
I rewound my life’s memories before the internet and smartphones.  Things were pretty good.  I knew where most of the pay phones were on my four-state circuit.  I never felt out of touch.
About Google, I confess.  That cyber wizard is nifty.  But then again, I had then—and I have now—friends who provide Google-like answers to fill in the gaps on my knowledge.  It’s my good fortune to have plenty of friends much smarter than me.  And they’ve never refused my inquiries, even if I called from pay phones or a flip-phone.
As you can see, I was gearing up to enter this contest. Giving up my handy smartphone wouldn’t be easy, but I have laptop and desktop computers. I rarely use my iPad.  Long ago, I vowed not to get hooked on Facebook, Twitter, Instagram, Snapchat, Linkedin and other social-media platforms. Besides, I’ve read plenty about how these are more likely to make you sad versus happy.  I’m happy to “just say no” to those temptations.
But as I read deeper into the vitaminwater competition requirements, I discovered my less-than-modern attitudes about social media would deny me a chance of banking the $100,000.
That’s right.
Entries must be submitted via Twitter, #NoPhoneforayear, or by Instagram, #NoPhoneforayear.
Uh-oh.
I don’t do hashtag talk.
But if you win the prize, I just might see you.
That is, if I’m not staring at my smartphone.