If it’s possible to squeeze every ounce of living out of 91 years, that’s exactly what Dr. Lawrence Bennett Jr. did. Even from his hospice bed, Doc entertained, cajoled, advised, comforted and prayed for others. If I had to describe my boyhood dentist, who became a lifelong friend, I’d suggest: “He cared.”
As an antsy kid—sitting in his Cherry Street office—I heard a grinding noise coming from the next room. I could see what looked like a big hypodermic needle under a white cloth. I tried to imagine what was going to happen to me.
Pretty soon I knew.
A drill was going to be whirring in my mouth. But first, that big needle was going to be poked into my gum. In a calming way, the young dentist peppered me with questions. I got my first lesson in how to talk when someone has his hands in your mouth.
Doc did more than fill a cavity. For more than 60 years, he filled my life, as an irreplaceable friend. Just last week—when I called him—he said, “I’ve been thinking outside the box about Wayne County. I have some ideas for you.”
Doc was laboring to breathe, so I asked Air Elliott—who was in the room with him—to write down his suggestions. Doc said that he knew his time was short, but he wanted me to know that my family was on his prayer list of 150 people. In a whisper, he said, “I pray for you and your family … especially your children, Alan, Emily and Eric.” He closed with “I love you.”
That was a classic Doc.
Oh, how he cared!
Our children learned to swim in the Bennetts’ pool. In addition to Larry and Jann Bennett’s four daughters—Julie, Widget, Jody and Maggie—their Palm Street backyard was always teeming with children and adults. While some were on the tennis court, others were splashing in the pool. Future Olympic gold-medal swimmer David Larson was among them.
When Doc retired, he didn’t slow down. He told me that men in his family had a history of dying young with heart disease. He was determined to defy the odds. He played competitive tennis and pedaled his bike all over Georgia. 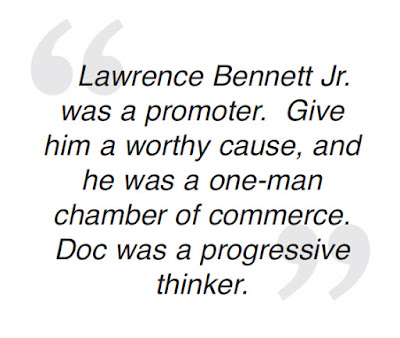 Doc said he cared about my health, too. He encouraged me to jog with him and his tennis partner Bob Smith. One morning, 10-year-old Alan joined us for a predawn run around Jaycee Stadium’s track. When we got home, Alan asked, “Does Mr. Smith not like Dr. Bennett?”
“Why would you ask that?”
“Because he talks to Dr. Bennett like he’s mad at him.”
Laughing, I said, “Doc calls Mr. Smith ‘Bobnoxious.’  That’s just the way they kid each other. Watch, and you’ll see that they really love each other.”
After Doc could no longer jog, he wore out a truckload of tennis shoes walking around Jesup. When he couldn’t take those strolls, he exercised his mind—even more. Years ago, he told me that he learned to speak Spanish watching Spanish soap operas. And in his final days, he quoted Latin from his hospital bed.
That’s classic Doc, too.
Lawrence Bennett Jr. was a promoter. Give him a worthy cause, and he was a one-man chamber of commerce. Doc was a progressive thinker. He believed that small people thinking small kept a small town small. I can’t wait to see the list he dictated to Air.
For 91 years, Doc cared about his family, his friends, St. Paul’s Episcopal Church, his community and the world.
Oh, how he cared!