The internet is a blessing and a curse

The internet needs two buttons pinned to its chest. One should proclaim: a blessing. The other should admit: a curse.
There’s no denying technology—through the internet—has been a life-changing revolution. My industry has benefited from lightning-fast ways to do business, but there have been crippling consequences, too. I’ll get to that in a minute.
Look around. You can see the benefits everywhere. Students of all ages have access to more information than ever before. And what about the technology-led advances in medicine? Whoever gifted us with the internet idea ought to feel proud—for the most part.
Now, consider the “other part” of the internet. While it has lifted us in myriad ways, the internet has significantly dragged us backwards. Civility is on the fast track to extinction. The internet has birthed a legion of anonymous bullies who feel unashamedly brave to spew their venom. Call them what they are: cowards. Every time I read of a suicide that is linked to cyber bullying, I want to heave my breakfast into the azaleas.
I am not a fan of social media, especially Facebook. Read The Accidental Billionaires, about Mark Zuckerberg’s rise to riches based on his tawdry scheme to illegally hack Harvard’s student files, especially those of female classmates. His company’s reckless handling of personal data should be criminal.
I respect the right of others to make choices, and I choose to never have a personal Facebook account. Furthermore, Facebook is irresponsible in the dissemination of false information. The proliferation of fake news has severely damaged the reputation of credible journalism. That makes me want to vomit, too.
Since the arrival and explosion of the internet, newspapers aren’t the only aggrieved businesses. Go up and down Main Street in any town. The disruption is widespread. Realtors are hammered by Zillow, Offer Pad, Red Fin and the like. Carvana and others are taking on auto dealers. Yesterday, I complimented a 4-year-old on her new shoes. She smiled and said, “A man brought them to the front door.” Online shopping—primarily Amazon—is doing its best to put plywood on the windows of retailers everywhere.
Yes, I know. Technology and the internet have created millions of jobs, but how many paychecks have they destroyed? As industrial robots take over, where will those displaced workers go? When driverless 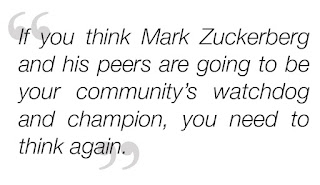 technology is perfected, how many truckers and professional drivers will be in the unemployment line?

This revolution is like a real-life game of hopscotch. We jump two blocks forward and leap three back, hoping we wind up ahead and not behind.
On the flip side of the internet’s positives for newspapers, here’s the curse. Generations are being trained that what they read on the internet is synonymous with free.
Sixty years ago, my grandmother predicted what is happening today. She warned, “If you let folks get milk through the fence, they’ll never buy a cow.” Newspapers were dumb to let Facebook, Google, Yahoo and information aggregators milk our valuable content “through the fence” without paying for it.
The most expensive investment a newspaper makes is the gathering and editing of news. Our reporters cannot work as unpaid volunteers. But in the meantime, internet behemoths—such as Facebook and Google—are raking in billions in profits, taking free rides on the backs of journalists.
If you think Mark Zuckerberg and his peers are going to be your community’s watchdog and champion, you need to think again. When a newspaper’s inquisitive spotlight doesn’t shine into dark corners, the welfare of the community is at risk.
And what’s scary is that too many people don’t realize that or care.
Excuse me.
I’m going to find the azaleas.