Here's genesis of our family and book

Note: Hardback copies of The Last Man To Let You Down, My Daddy the Undertaker will arrive in late July with eBooks now available on Amazon.

Side-by-side, the two families lived in Putney. Between them, there were nine children and one radio. No one complained about the lack of television, video games, computers or the internet. None of the nine imagined those entertainment gadgets any more than a man walking on the moon. That’s why the blended band of Great Depression Era children was in the yard and up a tree, playing.
The limbs were shaking with laughter until the youngest girl dropped her doll. When its porcelain face shattered on the hard Dougherty County dirt, the curly-headed 6-year-old started to cry.
Scrambling down, the kids were pelted with falling tears. All vanished except one. An 8-year-old boy helped his grieving playmate to the ground. Patting her shoulder, he said, “Please don’t cry. One day, I will get you a baby doll even prettier than this one.”
Before long, the train whistle blew, calling the boy’s father to another railroad job on the other side of the state. Seven years passed. The little girl’s father decided to take a trip to see his old neighbors. With his wife and children packed into their Packard, they were surprised to see an older but familiar face greeting them on the Cherry Street curb. The car hop was startled to see them, too. 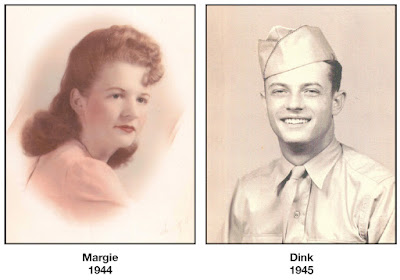 When the white-jacketed teenager attached the refreshment tray to their car, he noticed the girl wasn’t little any more. Nor was she crying. She was a beautiful, young woman with sparkling blue eyes. And she was smiling.
The chance encounter made an impression. Another five years would roll by, and a handsome Army private appeared in Panama City, Florida. Before he left for the South Pacific, he had to say what he had been thinking—“I love you”—to the girl who once dropped her doll.
He was the first to correspond from the Philippines, asking, “Why don’t you write a lonely soldier?” A handwritten romance flowed back and forth. By the end of World War II, love letters filled shoe boxes in her parents’ home on Ichauway Plantation where they operated the country store for Robert W. Woodruff, president of the Coca-Cola Company.
As 1945 drew to a close, the young woman was washing dishes and looking out the window when she saw someone kicking up Baker County dust in the lane leading to the store. Closer and closer he came, until she could see it was a soldier. By the time the corporal got to the edge of the front porch, Margie sailed into Dink’s eager arms. And that’s where she remained for 52 years. (February 3 would have been their 62nd anniversary.)
On December 2, 1946, there was a knock outside Room 321 in Ritch-Leaphart Hospital in Jesup. The door swung open. The visitor was holding a bundle in his arms.
“Margie,” Dink said, “do you remember the time when you dropped your doll and cried? And do you remember I promised you that one day I would get you an even prettier baby doll? Well, here she is—our daughter, Sandy.”