May Richard Jewell and Kathy Scruggs rest in peace

The year was 1996—July, to be exact. Billy Payne and Atlanta’s Olympic dream had come true. But on July 27, a Centennial Park explosion turned the celebration into a nightmare. The bomb sprayed shrapnel, causing two deaths and hundreds of injuries. The casualty count could have been higher—much higher—had it not been for a hero, a once-obscure security guard. Richard Jewell had found the mystery backpack under his bench and sounded the alarm: “Get back! Get back!”
The smoke had barely lifted above Atlanta’s skyline before Richard was offered a book deal. NBC’s Katie Couric and hordes of journalists wanted to tell his story. But in an abrupt U-turn—72 hours later—Richard Jewell was snatched from a hero’s “heaven on earth” to a-walk-barefoot-on-white-hot-coals “hell on earth.” An FBI agent whispered to a newspaper reporter that the bureau suspected the “hero” to be the bomber. Atlanta police confirmed the tip.
What?
The bureau believed the former Piedmont College security guard was the suspect in the bombing. In the race-to-be-first 24/7 news cycle, reporters—print and broadcast—took the leak of suspicion and bolted past judicial process. Richard Jewell had to be guilty. For 88 days, Bobi Jewell and her only child endured hellish torment. Real evidence eventually exonerated Richard. But despite financial settlements from lawsuits against CNN, NBC and others, his life was ruined.
The sad story gets sadder. 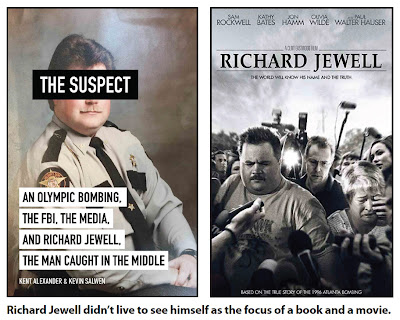 Richard Jewell, 43, died and never got to read The Suspect or see the just-released movie Richard Jewell. After reading Kent Alexander and Kevin Salwen’s book, I raced to the theater. Producer Clint Eastwood got it mostly right, but I believe that he defamed reporter Kathy Scruggs, who broke the FBI leak in The Atlanta Journal-Constitution.
Some would say that Hollywood—in how it wrongly portrayed Kathy—was what-goes-around-comes-around justice for the way the media treated Richard Jewell. Kathy died at age 42. Maybe it’s best she didn’t see the movie. Our families have been friends for decades. Kathy was no angel. She was a polar opposite of her courtly parents. With her colorful flair, she was a hard-charging, savvy reporter who made a mistake by trusting her sources in this case. It’s sad, too, Kathy didn’t live to see the newspaper vindicated in the libel suit against it.
As I sat in the darkened theater—watching the post-movie credits scroll—my mind scrolled back to 1996. I was chairman of Athens 96, the volunteer group planning and coordinating the community’s involvement in the biggest venue outside of Atlanta. The University of Georgia hosted four events. Dignitaries from around the world were in and out of our home. We introduced quite a few to grits.
When the torch-run signup neared, Billy Payne called, “Don’t you want to carry the torch?” Twenty-three years later, I still pick up my torch and reflect on that once-in-a-lifetime experience. Billy also asked Pam and me to be presidential ambassadors. We were back and forth to Atlanta in our royal-blue blazers.
On a return trip, I stopped to retrieve the mail. The mailbox was gone. Looking up, I noticed something on the side of our house. I called 911. Within an hour, I was holding the heels of an ATF agent as he leaned out a second-story window to dig a 2-inch pipe bomb’s cap out of the stucco. It was right below where our 17-year-old son, Eric, normally sat doing his homework.
I called Billy. We wondered, “Had the Olympic bomber struck again?” We installed surveillance cameras. Almost a quarter-century later, we don’t know who or why our home was targeted. But we do know that no one was hurt, and we never suspected Richard Jewell.
Before walking out of the theater, I remembered Orange Street Elementary principal Tom James’ admonition. Everyone—including journalists—should remember: “‘They say’ and ‘I heard’ are the two biggest liars you’ll ever meet.” 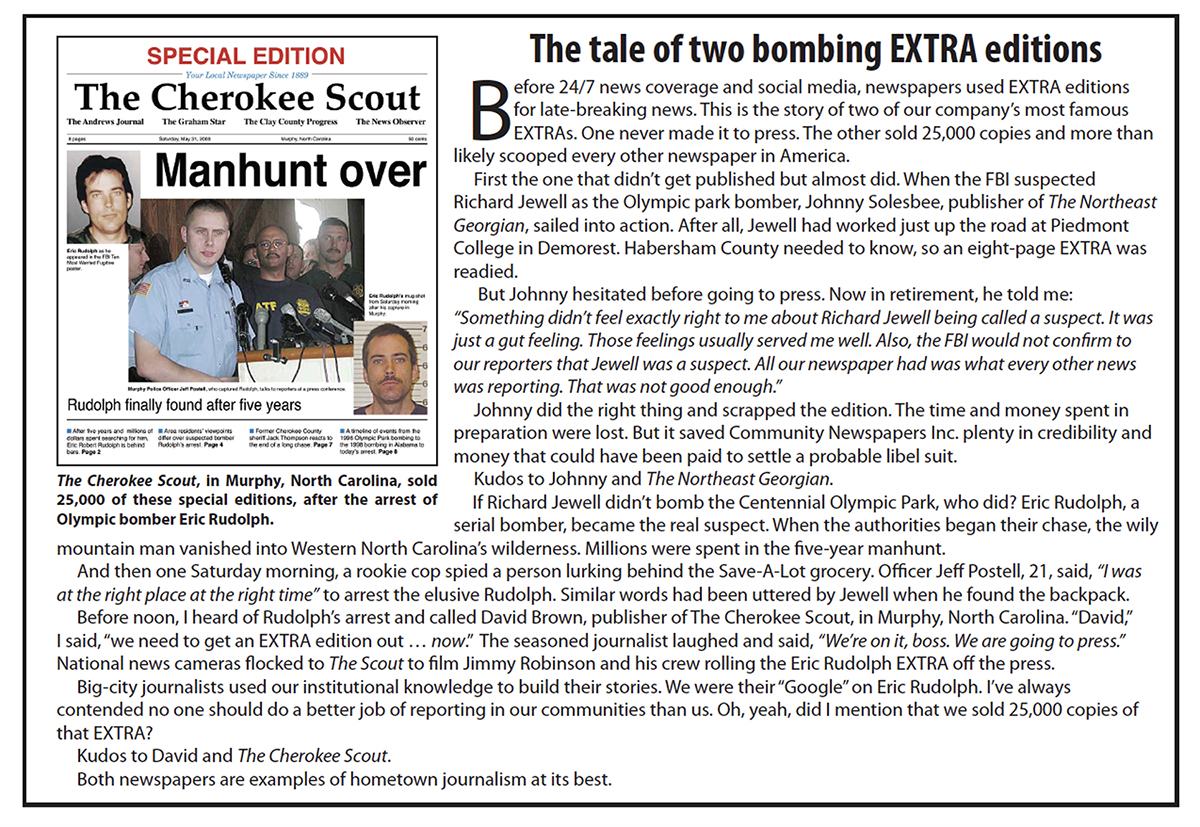