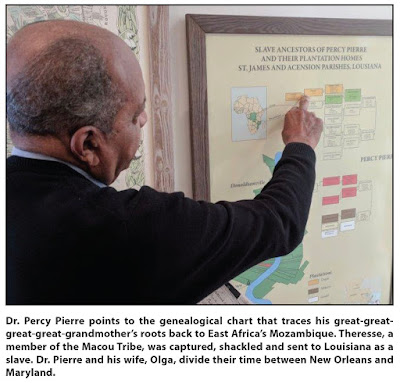 When his midwife grandmother lifted him into the world of the tiny St. James Parish village of Welcome, Louisiana, she had no way of knowing our nation would be “welcoming” an African-American history maker. Percy Pierre’s grandmother’s mother was a slave, as were his other seven great-grandparents. His ancestors would have been proud to know that he was our country’s first African-American to earn an electrical-engineering Ph.D.
On New Year’s Eve 2019, my friend pointed to where he was born on Jan. 3, 1939. The small house—long gone—is now just a patch of head-high weeds, a seven-iron shot from the Mississippi River levee. His cousin, Willis Octave, lives 100 yards further back.


From there, he escorted me and my grandson Wyatt Wilson to the St. James cemetery where his parents—Percy Sr. and Rosa Villavaso Pierre and other family members are buried. We also stopped to read the historical marker of the Settlement of Freetown, established by former slaves. Three of Percy’s ancestors or relatives were founders. As Dr. Percy Pierre climbed into the upper echelons of academia, he remained connected to his roots, embedded in the rich dirt of the Mississippi Delta. 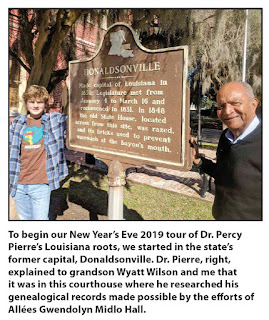 Percy and I grew up three states apart in a segregated South. How did our paths cross in western New York? A mutual friend, Erroll Davis, connected our dots by inviting us in 2018 to his family’s home at the Chautauqua Institute. When I served on the University System of Georgia Board of Regents, Erroll was its chancellor. Erroll and his wife, Elaine, have known Percy and his wife, Olga, for decades.


It was there—under the canopy of trees on that storied campus—where Percy and I walked and talked. I am forever curious about the lives of others. By our second conversation, I could tell my new friend was enjoying a storybook life. In his quiet, reflective way, Percy told how his family moved downriver to New Orleans when he was 4. Stories of visiting with his grandparents reminded me of summers on my grandmother’s farm.


While attending all-black St. Augustine High School, the faculty recognized the future valedictorian’s gifts. His mentors championed their top student. Full-ride scholarship offers arrived, including Ivy League’s Amherst and Princeton. Percy chuckled and told me, “If I had told my friends that I was going to Princeton, they wouldn’t have known what or where Princeton was.” 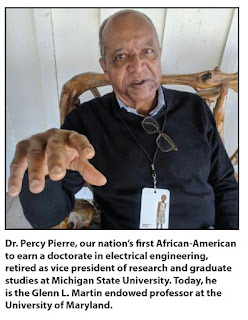 Then Notre Dame came knocking. Because of football, everyone in Percy’s Catholic circle knew about the Fighting Irish. In South Bend, Indiana, Percy earned bachelor’s and master’s degrees. Graduating from Johns Hopkins University with his doctorate and serving as a White House Fellow in the office of President Richard Nixon launched Percy on a rocket-ride career. Consider these milestones: 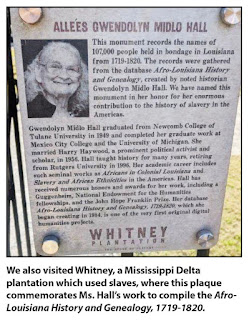 By now, you’d think the 81-year-old scholar would be ready to prop his feet on the veranda railing of his and Olga’s century-old home, which has been featured in Life magazine. Not so for the history-making native of Welcome, Louisiana. The couple divide their time between New Orleans and the Washington, D.C. area, where daughters, Kristin and Allison, live. That also allows Percy to serve as adjunct professor at the University of Maryland. Percy was born to teach, inspire and do research.


I would struggle in his engineering class, but I am fascinated with his genealogical research. For years, Percy has dug through mounds of musty records to trace his lineage back to his great-great-great-great-grandmother. Theresse, a member of the Macou Tribe, was captured in East Africa’s Mozambique and transported—in chains—to lower Louisiana, not far from where her great-great-grandson’s wife delivered Percy.
What a life.
What a story.
What a book this could be.