“We make our friends; we make our enemies; but God makes our next door neighbor.”
—Gilbert K. Chesterton
Those words have never been truer than when our family moved to the corner of Younce and Bamboo streets. Big Dink’s undertaker’s take-home pay was less than $100 per week, and the small Knox-built house was the first to have my parents’ names on the deed. In the early 1950s, we lived 50 feet away from Aubrey and Kathleen Hires, along with their son, Pete. Those four years laid a friendship foundation that has lasted a lifetime.
Aubrey was the county school superintendent. Kathleen was a teacher, and their only child, Pete, was my age. And they had something we would never afford, a maid. Edna—in her white starched uniform—was like a member of the Hires family, and she was entertainingly colorful beyond her ebony complexion. 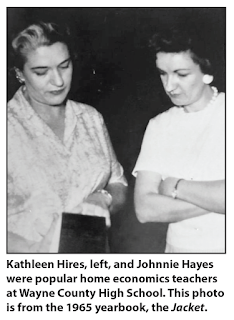 As a barefoot 3-year-old next door, I was entertainment, too. Years later, Mrs. Hires told me about the times that she paid me a nickel to answer, “Dink, what’s in your hands?” In a syrupy drawl, I’d say, “A tony frog,” as in “toady frog.” Other times, it might be an “asshopper,” as in “grasshopper.” I can still hear her cackling.
For weeks, I have known my 12th-grade homeroom teacher had been slowly slipping away. Last Thursday, Pete emailed from Rhode Island the news of what we all expected. Kathleen Hires Coody was gone, but what she left behind was a schoolhouse of memories.
During our high school years, Mickey Mantle and Roger Maris, in their pinstripe uniforms, lit up the scoreboard of Yankee Stadium and beyond. At Jesup High, we had our own all-star pair, Kathleen Hires and Johnnie Hayes, in the second hall’s connecting home economics labs. If you were in one homeroom class or the other, you enjoyed them both. The super stars were like giant magnets attracting students.
Classmate Mardell Hodge Jacobs, Johnnie Hayes’ niece, said of Kathleen Hires, “She was powerful, elegant, candid, smart, beautiful, and a woman before her time. One of her favorite sayings was, ‘I wouldn’t do that for all the tea in China.’”
The class of 1966’s class trip was to Washington, D.C. and New York. The train had just crossed the Altamaha River when some fellows starting unscrewing the caps of Southern Comfort. Without a bullhorn, a powerful voice boomed from the back of the rail car. “If you boys don’t put those half-pints back in your suitcases,” Mrs. Hires shouted, “I’ll have the engineer back this train all the way to Jesup.” You could hear latches on luggage snapping shut. The imbibers would not have doubted her “for all the tea in China.”
Pete’s daddy called my daddy “Neighbor.” Pete and I have continued that tradition, calling each other “Neighbor.” Just before Christmas in 1952, the mercury dropped below freezing when we got the call that my mother’s father had died. Before breakfast the next morning, there was a knock at our back door.
Standing there was Aubrey Hires, with frost on his polished wingtips. He had just crunched across the 50 feet of the icy St. Augustine grass between our houses. “Neighbor,” he said to Big Dink, “take my car to Margie’s daddy’s funeral.” Our Dodge didn’t have a heater. His new Buick did. When Pete’s dad died in 1985, I was a pallbearer. As I helped carry Aubrey Hires to his grave, I said a prayer of thanksgiving for his unforgettable act of kindness.
And now comes a time to bid farewell to a remarkable lady, Kathleen Hires Coody, whose memories are enshrined in a special place in my heart. In her words, I wouldn’t trade “all the tea in China” for our lifetime of friendship.
Yes, indeed. Only God makes neighbors such as Aubrey, Kathleen and Pete Hires.