Something green and fried put Juliette on the map.

That was something to celebrate in 1991.

Something grayish-black has put Juliette back on the map.

Now it’s 2020, and there’s nothing to celebrate about the new notoriety.

First, it was Hollywood’s version of Fannie Flagg’s book Fried Green Tomatoes that sent droves to
Juliette’s Whistle Stop Café. We craved a taste of the movie’s namesake. 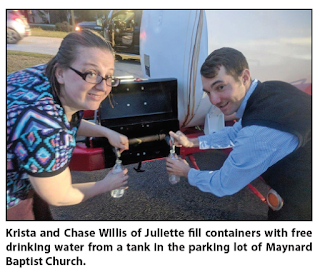 Today, almost no one craves a swig of Juliette’s water for fear of being poisoned. On March 9, I saw that in the faces of more than 200 in Monroe County’s small village. In the parking lot of Maynard Baptist Church, people—filling bottles and jugs from the water trailer—underscored the anxiety.

If you have been snoring through the toxic coal-ash chatter, Juliette says, “Quit hitting the snooze button. Wake up! Rub the sleep out of your eyes. Pay attention!”

The Middle Georgia Water Alliance has rallied the community to get schooled on coal ash. In Juliette’s backyard is one of America’s biggest coal-fired electric plants. There are who-knows-how-many tons of harmful waste floating in Plant Scherer’s unlined pits. Those coal-ash ponds reach below the ground into the aquifer which provides Juliette’s water source. Some household wells are showing unsafe levels of toxic substances found in coal ash.

During this year’s General Assembly, more than 30 Juliette residents chartered a bus to take their concerns to Georgia’s lawmakers under the Gold Dome. There’s a mad scramble to prove who’s right and who’s wrong. Georgia Power believes there’s no reason for alarm. What I’ve witnessed doesn’t subscribe to that company line.

The volunteer group invited me to their most recent town-hall meeting. To get to Maynard’s sanctuary, I had to drive past that big tank in the parking lot. Pastor Matthew Bishop’s congregation is doing close-to-home missionary work by also supplying free drinking water.

I visited with Chase and Krista Willis, who were filling plastic containers, while their child waited in the car. Krista explained, “We live right at the plant’s entrance. And when our neighbor said her well was tainted, I figured we better stop drinking our well water, too.”

There’s an old saying about the difference in minor and major surgery. It goes, “If you are having surgery, it is minor. But if I’m having surgery, it’s major.” There’s nothing “minor” about what’s happening in Juliette. And that’s how I got the call. Juliette wanted to hear about Wayne County’s crash course on that grayish-black waste, coal ash.

Not one person said Plant Scherer should be shuttered. The good-paying jobs, the local taxes paid and the electricity provided are much appreciated. What Juliette wants is what every community—with a coal-fired plant—should want: a cleaner, safer source of energy. And that starts with prompt and responsible cleanup of the toxic coal-ash waste.

Another thing that I noticed on March 9 was the passionate but respectful way the speakers expressed themselves. Remember Kathy Bates’ VW-smashing character, Towanda, in the Fried Green Tomatoes movie? She wasn’t there. Mike Pless orchestrated a model town-hall gathering.

The moderator asked whether there were any Georgia Power representatives in the audience. No hands were raised, but surely the message will find its way back to Atlanta.

And if Georgia Power listens and does the right thing, that’d be something for Juliette to really celebrate.