Something didn’t taste right.  And then I looked in the mirror.  Even though it was past midnight, my bleary eyes could see that I was foaming at the mouth.
Whaaaat?
Looking down, I spied the problem.  I hadn’t squeezed Crest on my toothbrush.
Oh, no!
Instead, I had pumped two squirts of anti-bacterial soap on the bristles.
Whaaaat?
Do you remember the first time you were caught cussing?
I do.
My mother marched me into the bathroom.
“Young man,” she said, “we don’t use dirty words in our family.”  Then she swiped my toothbrush back and forth on a bar of Ivory and washed my mouth out with “it-floats” soap.
I don’t remember the actual unacceptable word, but I’m sure it was benign compared to the steady stream of “dirty” words we hear on TV today.  And there isn’t enough soap in the world to sanitize what’s spewing from movie screens.
So why was I cussing this time? 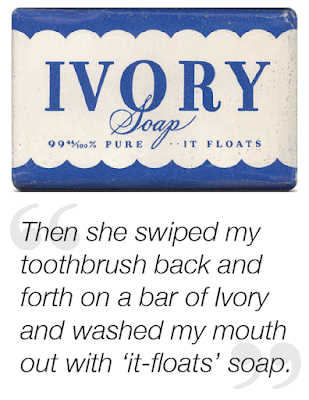 The day had been long, including 10 hours of driving.  I was ready to turn out the lights.  But before I could kick off my shoes, our schnauzer brothers had to take a final lap around the backyard.  Amos Moses and Andy Griffith don’t know they are 13 years old.  Every time they go outside, it’s as if they know they are going to catch a squirrel this time.
Sunday night, they were obsessed with armadillo scent in the flower beds.  Tugging on their leashes, they insisted on sniffing the empty critter trap several times.  After about five minutes of ignoring the purpose of going outside, I barked a few unnecessary words.  Cussing didn’t help. They still stalled in taking care of business before we trudged back inside.
And then it happened.
Still grumbling, I absentmindedly loaded my toothbrush and started brushing.
The bubbles frothed up.
My first instinct was to spit out the soap and yelp, “@#%&!”
But I didn’t.
Instead, I laughed.
Yes, I did.
I deserved to have my mouth washed out with soap, again.

Brothers practice cussing
To eliminate the risk of getting to taste soap bubbles again, I’ll sanitize this old story.  Two brothers—6 and 9—were practicing cussing and decided to try it out at breakfast.
When their mother asked the 9-year-old what he wanted to eat, he said, “Think I’ll have some of those bleep Cheerios.”
And with that, his mom gave him a backhand.
Turning to the 6-year-old, she asked, “Now, what would you like for breakfast?”
The younger one said, “Well, it sure as bleep won’t be any of those bleep Cheerios.”

Puckered for a kiss
When my head finally found the pillow, I couldn’t go to sleep  just yet.  The soap-bubble incident took me back at least 60 years.  I remember Big Dink storming out of the bathroom, looking for Mother.  He had accidentally grabbed the wrong tube and brushed his teeth with something other than Crest.
Holding a tube of Preparation H, Daddy found Mother in the kitchen.  He was ready to unload on her for moving the toothpaste from its regular spot by the sink.  Margie, ever the diplomat, preempted his outrage by saying, “Well, Honey, your lips are really puckered, so why don’t you just give me a good-morning kiss?”