Willie has them laughing in Heaven

As a 20-year-old bride, she left the bright lights—albeit the small-town lights of Fort Valley—to set up housekeeping on a washboard-dirt road in remote Southwest Georgia. The couple’s honeymoon cottage was a rundown tenant shack. Illumination came from a 40-watt light bulb hanging from the low-slung ceiling.


For the city girl, to “powder her nose”—as her generation called it—she had to traipse out back to a privy shaded by an ancient live oak’s canopy.


When Mamma and Daddy first visited, her businessman father did a 360-take of the place and said, “Sister, it must be love because there ain’t another d@#% thing here.” Her parents named her Willene, but her husband and friends called her Willie.


Early on, she knew few people in Mitchell County other than the farmer who had brought her there. Some days, to salve loneliness, Willie would climb on Lamar’s small Case tractor and ride sidesaddle—clutching a fender—as the World War II vet plowed and planted. 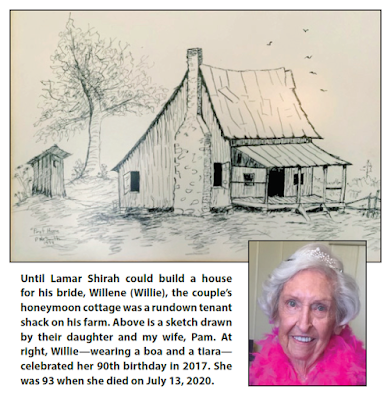 Hopeful Baptist Church became the meeting place of friends for the rest of Willie’s life. Young wives became young mothers, and the growing families filled the pews of the country church on the Camilla-to-Bainbridge Highway.


I know that House of the Lord well. Fifty-one peanut seasons ago, I married Lamar and Willie’s daughter, Pam. Her dad and brothers parked their tractors to put on tuxedos.


Two months ago, Lamar, 94, was laid to rest in the Hopeful Baptist Church Cemetery. Sunday, Willie, his wife of 73 years, will be put beside him. Three years ago, their son Ray was the first in the family plot. Nearby, Lamar’s parents—George and Katie—are buried.


To know Willie was to know she was a fun-loving spirit in the kitchen, hosting a party, on the dance floor, telling jokes or masterminding pranks. Two of Willie’s 1950s stories still tickle Hopeful folks.


Willie dialed her friend Peggy and said, in a disguised voice, “Mrs. Cox, I am with the phone company. We’ve been receiving complaints about static in the lines. I need your help, please, ma’am.”


There had been some static on Peggy’s party line, so she listened carefully. Willie continued, “We believe the problem is from dust in the lines. Please place your receiver in a paper bag so that we can blow out the dust.”


In the background, Willie could hear her friend ruffling a paper bag. Just before Peggy dropped the receiver into a Piggly Wiggly sack, she recognized Willie’s laugh and the prank. Right now, I imagine the two are laughing about it in Heaven.


Betty’s children grew up with Peggy’s and Willie’s. One day, the three mothers talked about the stern warning on pillows and mattresses: “Under penalty of law this tag is not to be removed except by the consumer.”


Willie saw the consternation in Betty’s eyes. Her friend confessed that she had clipped the tags but that she had saved them in an envelope in a kitchen drawer. Another practical joke was born.


Again, Willie disguised her voice and called Betty. “Mrs. Baggs, I am an inspector with the federal government. I understand that you might have removed the tags from your pillows and mattresses?”


Betty stammered, “Uhhh, uhhh, yes. But I’ve saved them all in an envelope. I can show you.”


Willie’s cackle exposed the ruse. And when Betty gets to Heaven, the angels will join the laughter of the three best friends.


Willene Lavender Shirah might have been a city girl when she came to the country. But when she entered the Pearly Gates, Willie, 93, was a much-loved dirt-road sport.