Just watching him, you knew the blond-haired boy was destined to be an achiever.  He sat with parents Bobby and Sharon—along with his sisters Sheree and Stacey—a few pews apart from our customary spot in the First Baptist Church.  His superlatives—smart, poise, personality, talent, confidence, and a special drive—signaled Rob Gordon was going places.

The news of Rob’s latest advancement wasn’t surprising, but I did flash back to the 1980s.  I could see his command of the sanctuary’s grand piano, playing an original arrangement.  I blinked, and he was in a star role of a youth-department drama.  The blinks continued.  Now he is leading one of the University of Georgia’s statewide divisions.

And that’s the way it’s been for 49-year-old Robert E. Gordon Jr.

Rob is the new director of the Carl Vinson Institute.  Named for legendary Congressman Carl Vinson (1883-1981), the Institute adopted this mission: “To enhance the capacity of governments to serve citizens of Georgia and around the world.  By improving governance … we improve the lives of people worldwide.”

In everyday language, the Institute’s goal is to better prepare the leaders who are making decisions in Georgia’s state and local governments.  And if there was ever a need for better-prepared leaders, 2021 would be the time.

Rob believes his passion for government goes back to his after-school days of “growing up” in Jesup City Hall, where his mother was a clerk.  If I needed information or help at city hall, Sharon Gordon was a go-to person.  When his dad worked at the Jesup district office of the Georgia Department of Transportation, Rob was a regular there.  I wish his parents were here today.

I’ve encouraged Rob to keep good notes.  There’s a book in all this.  One chapter will be how he could have met his future bride but didn’t.  As children, Leslie Stafford and Rob Gordon visited their Ludowici grandmothers. Leslie played on one side of the town’s railroad tracks.  Rob played on the other side. They were close enough to shout back and forth but didn’t. 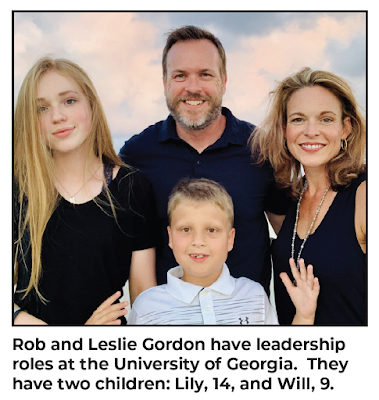 And then came the summer of 1998, Leslie and Rob—still not acquainted—were in Jesup.  Leslie’s Aunt Carmen (Howard) Jones was a persistent cupid, working both sides to connect the couple.  Carmen’s sister is Leslie’s mom, Lynne (Howard) Stafford, who is married to George, a retired UGA administrator.  The Staffords are retired and live in Jesup.

Now back to Rob and Leslie.  Rob finally gave in and called Leslie. They talked for 90 minutes. The UGA grads are soon to celebrate their 21st anniversary.  Daughter Lily is 14, and son Will is 9.

While Rob was attending George Washington University Law School in the nation’s Capital, his wife was at Georgetown University, earning a doctorate. Today, Dr. Leslie Gordon is UGA’s associate director of the Executive Ed.D. Program in Higher Education Management, and director of the Governor’s Teaching Fellow Program.  And if you want to keep up with the gifted Gordons’ rocket-ride careers, you’ll need several pencils.

Before returning to Athens to join the UGA faculty, Rob was an attorney with two of Atlanta’s most prestigious law firms. And prior to that—as a special agent of the U.S. Department of State’s Diplomatic Security Service—Rob strapped on a pistol and visited 46 countries.  One of his stints was guarding Palestine’s Yasser Arafat at Camp David.

Perhaps—in addition to his superlatives—calmness is why Rob Gordon continues to move through leadership chairs at the state’s flagship university.  In a very calm way, Rob leaves footprints of progress everywhere he travels.

You can be sure Rob and his faculty will build upon the esteemed legacy of the Carl Vinson Institute.  I will be proud but not surprised.

Even when he was just a blond-haired boy, you could see that Rob Gordon was going places.  So far, his journey includes laps around America and visits to 46 foreign countries.

And that’s just a start.