Remembering the Goat Man and the Pig on a cold day

are you remember Ches McCartney, a.k.a. the Goat Man. That’s what

happened when Randall Aspinwall, his son Nick, and his son Myles visited our

farm on a cold, rainy Saturday.

Randall spied the Goat Man’s picture hanging on the wall. That one glance rolled back the calendar 65 years.

When the Goat Man and his flock of goats clinked and clanged their way up and down U.S. 301, Ches knew he had a welcome spot to spend the night. Better yet, he wasn’t going to go to sleep hungry. Randall’s parents, Sine and Vida, invited the eccentric wanderer and his junkyard on wheels to rest at The Pig Restaurant, cattycorner and across the road from the Jesup City Cemetery.

Do you remember the animated neon sign with a fiddle-playing pig?

That high-tech sign for the era and the alure of The Pig’s hickory smoke were magnets to pull in customers.

Long before I-95 drained north-south traffic off U.S. 301, The Pig was a must stop for travelers. Sine Aspinwall mailed his smoked hams, bacon and sausage all over the nation. An after-school assignment for the Aspinwall boys—Al, Mike and Randall—was loading their dad’s pickup with meat orders and taking the shipments to the post office.

The Pig is where my lifelong affinity for barbecue is rooted. Sitting on a red-vinyl-topped stool—with my elbows on the Formica counter—I was mesmerized by sizzle and smell of the pork dripping on the amber coals in the open fit. And I was fascinated, watching the staff stab a ham with a pitchfork to turn it or pull the meat to the chopping board.

I can still hear the barbecue being chopped, just four feet away. And then Charlie Keith, Carobeth Highsmith, Harriett Stafford or Gussie Priester would deliver an unforgettable sandwich. Every barbecue bite since is 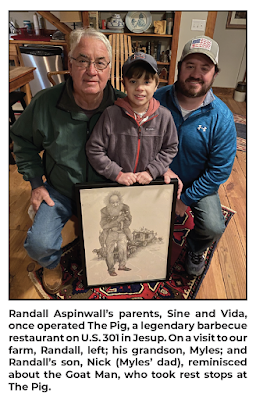 compared to The Pig.

Sine was more than a pit master. He was a salesman. Randall remembers his dad slicing off a piece of the ham’s crunchy outside, putting it on a saucer and sliding it to a tourist. Laughing, Randall said, “One bite and that Yankee was ordering a ham to be sent home.”

Randall also remembers the day that the Goat Man returned Sine’s generosity. The bearded guest—with distinct aroma of his own—gave the Aspinwalls a baby goat. My friend recalls the McCartney goat growing up in pen behind their house.

Looking at the picture, I told Randall, Nick and Myles about my memories of the Goat Man. My first was—as a child—at the old Milikin Field on U.S. 301 South. My last was in Twiggs County, before Ches McCartney died in 1998. I had heard he was living in a nursing home in Jeffersonville. I detoured off I-16, pulling a trailer of antique mule-drawn farm implements.

And there he was.

“Goat Man,” I said, “I’ve always ‘admired’ your stuff. Would you like to see some of mine?” He nodded, and we walked outside. Somewhere, I have a stack of photos of that visit. Somewhere.

Last Saturday was a bone-chilling day, so I told the Aspinwalls about asking the Goat Man, “Did you ever get cold at night, out there traveling to America’s 48 states?”

Ches McCartney scratched his whiskers and a said, “Naw, I slept with my goats. They wouldn’t let me get cold.”

He smiled and said, “I’d just pull up another goat.”