Georgia’s Gold Dome has a ‘Death Valley,’ too

On the South Carolina side of Lake Hartwell, there’s a giant gridiron edifice that you can see from your boat. Clemson’s stadium is dubbed Death Valley. Indeed, Coach Dabo Sweeney and his orange-clad Tigers have a tradition of laying to rest their opponents.

But this time, I’m not talking football.

If you jump on I-85 South—near Clemson—and drive 125 miles, you’ll find another “Death Valley.” You can see it from Atlanta’s Downtown Connector. Just look for a big gold dome.

Under our state’s iconic Gold Dome, a legion of lawmakers determine in which direction Georgia is going. Many laws are great and well-intentioned, but some proposed measures are never discussed. Zilch. I know of one such place where that happens, every year.

That’s why I call the House of Representatives’ committee on natural resources and environment “Death Valley.” The longtime chair is Rep. Lynn Ratigan Smith, R-Newnan. If she doesn’t like a proposed bill, it dies on her desk.

For six years, I’ve been focused on toxic coal ash. Rep. Smith knows a lot about coal ash, too. Georgia Power’s former coal-fired Plant Yates sits outside Newnan on the banks of the Chattahoochee River. Georgia Power admits some of its unlined coal-ash ponds are sitting in groundwater and leaking.

The Environmental Protection Agency (EPA)—after heavy political influencing—ruled coal ash is a nonhazardous material. I guess they thought we shouldn’t be alarmed about dangerous heavy metals such as lead, mercury, arsenic, cadmium, chromium and selenium. Perhaps the federal agency should ask the residents of Flint, Michigan: “What part of lead in your drinking water isn’t hazardous to your health?”

Now back to the Gold Dome.

Georgia Power is one of our state’s greatest assets. Beyond just lighting our darkness, the utility does a multitude of important things. But with all of its good deeds, Georgia Power wants us to overlook that its underbelly is coated with more than 50 million tons of toxic coal ash. And that brings me to our “Death Valley,” not Clemson’s.

If imaginary British sleuth Sherlock Holmes were stalking our legislative halls, he would say, “They don’t call it Georgia Power for naught.” Nothing—absolutely nothing—moves through Rep. Smith’s committee that doesn’t have Georgia Power’s stamp of approval. 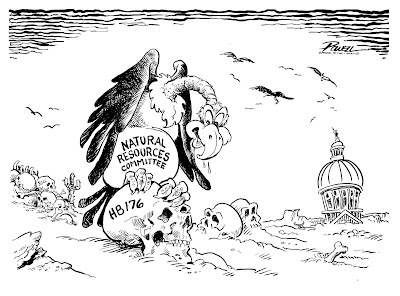 House Bill 176 was submitted to the natural resources and the environment’s committee. The bill would have required Georgia Power to excavate coal ash from unlined impoundments and put the toxic material in lined pits. Liners aren’t perfect, but that’s better than letting coal ash pollute the groundwater. (And I advocate putting those lined pits on Georgia Power property. Don’t make the company’s problem someone else’s misery.)

The buzzards—this year—can pick its bones in the House’s “Death Valley.” Georgia Power apparently asked the chair to let it die.

Does this make me dislike Rep. Smith?

We are both graduates of Jesup High School. I am partial to home folks, but I am disappointed with her kowtowing to Georgia Power. The state’s largest utility doesn’t own our environment. Our natural resources belong to all 10 million Georgians.

Georgia has a major coal-ash problem. The Public Service Commission (PSC) granted Georgia Power $8 billion—of ratepayers’ money—to clean up its toxic coal-ash piles.  I don’t understand why there is a hesitancy to do what’s in the long-term best interest of Georgia’s people and our environment.

Duh, but I do understand.

With the help of “Death Valley,” Georgia Power gets to decide which environmental legislation lives or dies.