Pogo has some advice for us

A famous opossum and I have two things in common. No, I don’t hang by my tail from tree branches. But cartoonist Walt Kelly’s “Pogo” and I were both born in 1948. And we both have opinions.

If you don’t know, you are either too young or you didn’t read the “funny papers” between 1948 and 1973. I connected with the philosophical possum early because his fictional home was about 40 miles from mine in Jesup. Pogo sometimes hung by his tail in the forest of the Okefenokee Swamp, aka “Land of the Trembling Earth.”

I’ll never forget the day when our yellow school bus pulled into the park near Waycross. Every moment of that elementary-school-class field trip was magical. The trees. The birds. The alligators. The excitement and anticipation of maybe seeing a bear. But most of all the mirror-like black water.

Pogo, the savvy and smart possum, has something to say, but hold on.

Unless we learn from the mistakes of the past, history often repeats itself. The Okefenokee’s past proves that. Multiple times, the magical natural wonder has been attacked. One of the grandest illogical schemes was to drain the swamp and log its wonderment out of existence. 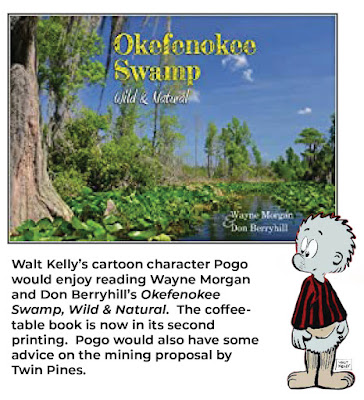 Hey, I own timberland. This newspaper is printed on paper from trees. I get that. I also get the need for responsible forest management, so why would you put a saw to something that took centuries to create? In the Okefenokee, there are countless trees that were growing when Christopher Columbus “sailed the ocean blue in 1492.”

The natural resources of the Okefenokee are a gift from God. Why would we want to risk its ultrasensitive ecosystem? With a few taps on a keyboard, we cannot order another Okefenokee Swamp from Amazon.com. An item you can get from Amazon.com is Wayne Morgan and Don Berryhill’s magnificent coffee-table book, Okefenokee Swamp, Wild & Natural. I recommend it to all, especially our state’s decision-makers.

Some people don’t get that the Swamp is one-of-a-kind irreplaceable. The latest threat to the Okefenokee is a mining proposal on the nearby lip of the Swamp in Charlton County. Supporters say Twin Pines, an Alabama mining company, will create much-needed jobs and boost the lethargic economy of the community that hugs the Florida border.

I get that. I am a business owner whose signature has been on thousands of paychecks over my 50-year career. Paychecks are vital, but all jobs aren’t worth the gamble. If the Okefenokee is harmed, so will be the tourism magnet that draws tremendous dollars into Southeast Georgia. I repeat, “There is only one Okefenokee.” There is far more downside than upside in the Twin Pines proposal.

In two sentences, I can summarize how I feel about this latest threat. No manmade scheme should put the Okefenokee Swamp at risk. And I do not trust Twin Pines with our natural treasure.

Now back to that witty and truth-telling possum. If our state officials allow Twin Pines or any other opportunists to put dollars ahead of common ecological sense, Pogo’s advice would be: “We have met the enemy and he is us.”