Stetson is a winner on and off gridiron

Before the rooster crowed Monday morning, my cell phone was vibrating. I wasn’t surprised it was Loran Smith. My friend sleeps fast, too.

I don’t know why we call each other “coach,” but Loran always figures I can answer his Jesup questions. “Hold on, Coach, I’ve got Stetson’s number right here,” I said. And then he explained. Loran wanted Stetson III to call his son to confirm an 8 a.m. appointment with the Quarterback Club.

The Athens boosters had something for Number 13 and four of his teammates. The $5,000 donation wasn’t for the Bulldogs personally but for their newly founded nonprofit DGD Fund. Perhaps you’ve followed the new NIL (name, image, likeness) regulations that allow college athletes to benefit from their status.

Some athletes are pocketing bundles of money from the new ruling. Here’s what Stetson, Payne Walker, John FitzPatrick, Owen Condon and John Staton decided. They are using their status as an opportunity to raise donations for their favorite charities. I know only the names of Stetson’s teammates, but I’ve known five generations of Bennetts. And I know this. Stetson IV is a winner on and off the gridiron. 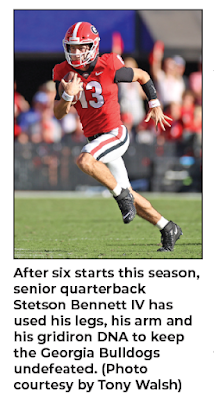 If you bleed Red and Black, you know the acronym DGD, “Damn Good Dawg.” Stetson III laughed and said, “Well, I say it stands for Darn Good Dawg.”

Nonetheless, when DGD Fund was launched in early September, $10,000 in contributions arrived within the first 24 hours.

Here’s how the DGD Fund Five’s NIL dollars are working to make a difference in the lives of others:

Owen Condon’s grandfather died of ALS complications, so he designated his portion to the ALS Association.

John FitzPatrick’s family lost a member to glioblastoma. His share of the donations is going to the American Brain Tumor Association.

John Staton chose Hilinski’s Hope, which focuses on the mental health of student athletes. One of his friends committed suicide.

Stetson Bennett’s choice is the Boys & Girls Clubs of America. The Athens Area Community Foundation is handling the donations for DGD.org.

For two seasons, we have seen Stetson, aka The Mailman, deliver for the Georgia Bulldogs. When he tied the UGA record for most touchdown passes in a game, some skeptics said, “It was only UAB.” And then came his leadership in back-to-back-to-back SEC wins over Arkansas, Auburn and Kentucky.

To that I say, “Winning is in Stetson’s DNA.”

And now, Stetson and his DGD Fund co-founders—Owen, Payne, John and John—are showing us that they play with their give-it-all-Bulldog hearts in life, too.

I knew long before the walk-on quarterback’s arrival at UGA that all Stetson Bennett IV wanted was to be a Bulldog. And he’s proven that he’s a winner on and off the gridiron.

In all of this, I do have two regrets:

Stetson’s granddaddy Buddy, the scrambling quarterback who led the Jesup Yellow Jackets to a 1954 state championship, isn’t here to savor this.

And of course, Larry Munson isn’t in the press box growling, “Whaddaya got, Loran?”