Stetson scores one for dreamers

Long before he could shake a red and black pompom, Stetson Bennett IV was destined to be a Georgia Bulldog.  Three days before the future quarterback was born in 1997, his mom was sitting in Sanford Stadium, shaking her red and black pompom. Both of No. 13’s parents—Denise and Stetson III—are graduates of UGA’s pharmacy school.

By now, if you follow college football, you know Stetson’s storybook path from walking on at Georgia in 2017, with no scholarship, to walking away from the 2021 Orange Bowl with its offensive MVP trophy.  He got that award the old-fashioned way—he earned it, with his arm, his legs and his third-generation gridiron DNA.  Stetson connected 20 of his 30 passes—with no interceptions—for 313 yards and three touchdowns.  And the Wolverines’ sack-happy defensive ends never caught scrambling Stetson.

Did the MVP hoist the massive silver bowl over his head for the world to see?

No, that’s not Stetson.

What he did do was to give credit to his teammates and coaches. And while No. 13 was on the ceremonial stage in Miami’s Hard Rock Stadium, fans joined his teammates chanting, “Stetson, Stetson, Stetson!” Interlaced were chants of “Mailman, Mailman, Mailman!” How Stetson got the nickname is another chapter in his storybook. One day at Pierce County High School football practice, he showed up wearing a U.S. Postal Service cap.  During Stet’s career, he rushed for more than 1,000 yards and passed for 9,000-plus yards, racking up about 100 touchdowns.  Yep, the “Mailman” really delivered for the Bears.

Surely Sports Illustrated will stumble upon this story one day. 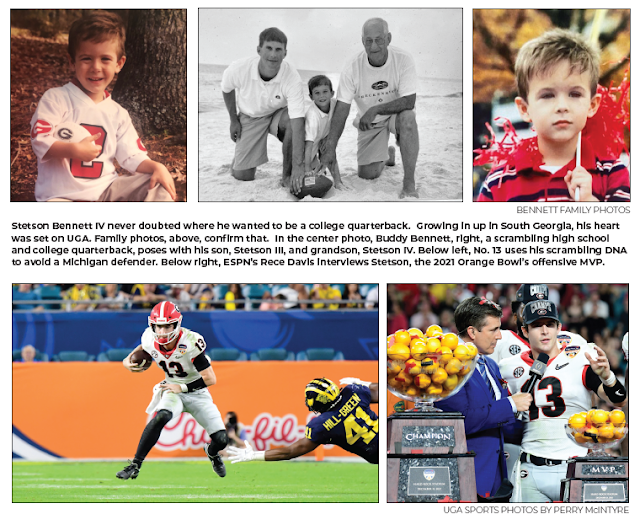 During the Michigan-Georgia game, I heard one of ESPN’s announcers say, “Stetson may never take a snap in the NFL, but he is already a legend with the Bulldogs.”  Legend, I agree.  About the NFL, I am not so sure.  You and I have seen a host of undersized overachievers excel at the “next level.”

No, I am not going to second-guess any of Stetson’s dreams.

Let’s say Stetson never takes a pro snap. Still, he has become a legend that extends far beyond the Bulldog Nation. Stetson is a testament to the power of determination in chasing your dream.  Imagine how many little-boy dreamers will study the story of Stetson and tell themselves, “I can do that, too.”

But those dreamers will need to take their studies deeper into Stetson’s life.  Stet III organized a wrestling program to help his young son get stronger. Stet IV played basketball and ran track, a sprinter. As a shortstop, he was named Georgia’s Class AAA baseball player of the year. He could have claimed a college baseball scholarship—no doubt—but his dream was to quarterback the Georgia Bulldogs.

Stetson Bennett IV decided that as soon as he was old enough to shake a red and black pompom.