Two little boys doing what they can

With three older brothers, this 9-year-old had to sharpen his wits early.  Smith may be younger and smaller than his siblings, but they know that the 80-pounder can hold his own—mentally and physically.  The third-grader never kowtows to a challenge.

That kind of moxie stirred his soul when he heard the news from Europe. Smith decided that he had to do what he could for the suffering people of Ukraine, even if he lived half-a-globe away in tiny Senoia, Georgia.

He scratched his chin for a moment.  Then you could see the smile in his dancing blue eyes.  “Yes!” he thought.  “Mimi bakes the best pound cakes in the world.  That’s what I’ll do.  Sell ‘Pound Cakes for Peace,’ and give all the money to the people of Ukraine.”

With the help of his mom, Emily, Smith Wilson learned that there are 17 Methodist churches in Ukraine.  When he realized 100 percent of the money raised could go to those churches, his energy ramped up three more notches.  From the pulpit of the Senoia United Methodist Church, Smith launched his campaign.  Before he climbed into his mom’s Suburban, Smith had sold 22 cakes and a half-bushel of icebox cookies.

That was a month ago.

Many of you have asked for an update on grandson Smith’s pound-cake initiative.  So far, I’m happy to report that he’s raised more than $5,000.  His paternal grandparents, Mike and Gwyn Wilson of Senoia, have kept their twin ovens set on 350 degrees.  Our daughter Emily has been busy taking orders and running the shipping department. 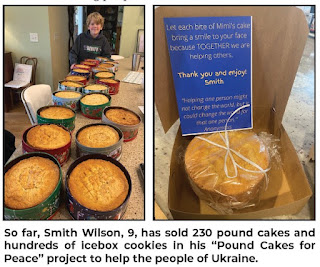 When school’s out, Smith is strategizing about how he can load his wagon with cookies and pull it door-to-door, selling to raise even more funds for Ukraine.

A barefoot boy stepped onto the beach and was startled.  As far as he could see, in both directions, the sand was covered with starfish.  “These starfish are going to die,” he thought.  “I must do something!”

Without hesitation, he raced down to the water’s edge and started slinging starfish back into the ocean.  One dozen.  Two dozen.  Dozens of dozens.  The boy kept scooping up starfish and sailing them into the sea.

All the while, the boy hadn’t noticed that a man was watching him.  After 10 or 15 minutes, the gentleman approached the boy and said, “I’ve been watching you.  There are thousands of starfish on this beach.  Don’t you think you are wasting your time?  You can’t possibly save all of them.”

The little boy straightened up, with a starfish in his hand, and said, “No, sir.  I can’t save them all, but I can save this one,” as he tossed it into the surf.

Smith knows that he is no match for Russia’s evil dictator Vladimir Putin.  But he knew that he couldn’t ignore the suffering people of Ukraine.  As the boy on the beach was doing, he just had to do what he could.

Smith’s Pound Cakes for Peace proceeds will stretch only so far among millions of hurting families of Ukraine.  But that doesn’t stop him.

Smith knows that even a third-grader can do something, anything, to make this a better world.