‘Ain’t no right way to do wrong thing’

Entitlement: “The condition of having a right to have, do, or get something.” –The Britannica Dictionary.

If you are wondering why Georgia Power is so determined to have its way with toxic coal-ash disposal, reread the definition of “entitlement.” In a dozen words, that’s why.

The state-regulated-utility monopoly doesn’t like the federal Environmental Protection Agency’s (EPA) new and more-protective rules. So, what is Georgia Power’s plan? Stuff ungodly amounts of money into its silk-stocking lawyers’ pockets to litigate to preserve its entitled status.

From Roman philosopher Seneca to country-music legends Waylon Jennings and Toby Keith, a host of people have offered advice along these lines, “Ain’t no right way to do the wrong thing.” But that logic doesn’t register with Georgia Power.

It believes there should be two sets of rules: one for them and their coal-burning buddies and another set of rules for everyone else.

How did this sense of entitlement come about?

Georgia Power has a brilliant strategy. From Day One, the company has hired the best people possible, people who radiate the company’s slogan, “A citizen wherever we serve.” In towns across the state, you’ll find Georgia Power men and women taking leadership roles. Noble causes and charities can count on Georgia Power’s financial support. No doubt, beyond being our state’s largest utility, Georgia Power is traditionally generous with its civic investments.

That strategy carries over to the General Assembly and other notable elected decision-makers. But Georgia Power doesn’t write those checks without certain expectations. If you’ll follow the money, you’ll see the returns the behemoth utility gets from its “friends,” who have accepted the dollars. Simply, the recipients are compromised and reluctant to go against their benefactor.

Look at it this way. 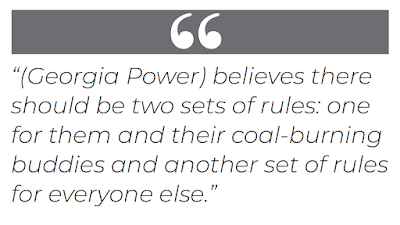 Georgia Power is savvy in making “deposits” in strategic places. That’s why it has no shame in seeking self-serving “withdrawals”—i.e., less than environmentally wise plans to leave poisonous coal ash leaking in many of its watery pits. Georgia Power feels entitled to do just that.

And why shouldn’t it?

In Georgia, the General Assembly, the Public Service Commission, the Environmental Protection Division (EPD) and the Department of Natural Resources (DNR) have—year after year—let Georgia Power have its way.

A former member of DNR’s board told me about his first meeting. “I didn’t catch the fellow’s name,” my friend said, “but he was like my shadow. Everywhere I went, he went. He offered to buy my dinner and a drink. He couldn’t have been nicer.”

Who was that stranger?

A Georgia Power lobbyist, of course.

I repeat, Georgia Power’s strategy is brilliant. Look at its people. Many are my friends. Consider the positive difference they make in our state. My goal isn’t to be Georgia Power’s nemesis. Instead, my determination is to get the utility to rethink its scientifically-proven-dangerous plan to leave millions of tons of toxic coal ash soaking into groundwater, ultimately polluting our drinking water.

Georgia Power has the financial wherewithal to drain those risky ponds and put the health-threatening waste into lined pits on its own property, away from streams and wetlands. Time won’t heal this coal-ash sore. The utility made billions burning coal. Georgia Power needs to reinvest a chunk of those profits to clean up its environmental mess.

Instead, Georgia Power and its parent, the Southern Company, prefer going to court to protect its entitled status. I am among millions of Georgians who believe that attitude is wrong.

Come on, Georgia Power, be a citizen wherever you serve.

And do the right thing.