We are lucky if we can find a best friend

The love affair didn’t blossom when he first opened his eyes on March 9, 1942. Not quite. But when Lawrence Cohen Walker Jr. started toddling around his daddy’s tractor and farm-supply store, he began taking notice of his hometown. And by the time he quit squirming in Perry United Methodist Church’s pews, Larry was in love with where he was born.

Before long, he knew every dirt and paved road in Houston County—making friends along the way—hauling fertilizer and delivering whatever Cohen Walker’s customers needed. Lifting those heavy sacks helped tone his muscles and stamina so that Larry could quarterback his high school football team and zip up and down the basketball court.

In a short time, Perry knew that it loved Larry Walker, too. On May 14, I witnessed more than 260 Walker family friends line up to express their respect and affection for Larry and his wife, Janice. The beloved couple were celebrating their 80th birthdays. I have anointed them the King and Queen of the Gnat Line.

In a lineup, Larry is unlikely to be the tallest. But height doesn’t necessarily make you a giant. In Central Georgia and beyond, Lawrence Cohen Walker Jr. stands tall, very tall, among a lineup of Georgia giants. Several major thoroughfares in Perry are named for some of Houston County’s most-honored natives. I know about four. 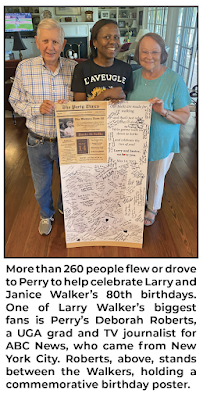 One is Gen. Courtney Hodges Boulevard, saluting a World War II legend. Another is Larry Walker Parkway, paying tribute to my friend, who served in Georgia’s General Assembly for 32 years. The retiring rainmaker of the Walker, Hulbert, Gray and Moore law firm would have made a fine governor before he exited politics in 2004. Without Rep. Walker’s vision and persuasion, Perry wouldn’t be benefiting from the Georgia National Fair and its 1 million annual visitors.

There’s another boulevard of note in Perry. It’s named for a former U.S. senator who should have been president. Sam Nunn would have carried a smart, savvy style of leadership into the White House.

In 1972, when Sen. Nunn went to Washington, Larry went to Atlanta to fill Sam’s seat in the House of Representatives. Now there are roads carrying the names of both distinguished statesmen.

Another Perry giant is honored on a section of I-75. Every time I drive the Gov. Sonny Perdue Highway, I say, “Thank you, my friend.” In 2008, the then-governor appointed me to the University System of Georgia Board of Regents. A couple of years later, Sonny placed Larry on the board, which governs the state’s public colleges and universities.

That’s when Larry and I reconnected. We had met in the late 1980s, serving on Georgia 2000, a blue-ribbon panel preparing the state for the new century. Almost 25 years later, our friendship galvanized. We formed a two-man book club. Our shelves are sagging with books that we insisted each other read. Our tastes in barbecue and music are identical.

We also share a passion for quail hunting. Across wiregrass Georgia, we’ve climbed on and off Tennessee walking horses in pursuit of covey rises. And fingerprints are all over our calendars, checking to see when we can pitch crickets in the middle of bluegill beds. Just yesterday, Larry asked, “What’s the river level? Think the fish are biting?” Not many days go by that we aren’t talking about something.

There’s an Irish proverb: “A best friend is like a four-leaf clover, hard to find and lucky to have.”