Nanelle Bacon helped me ‘to see’

Go with me for a moment.  But first, close your eyes.  We’re taking a trip back to 1960.  We’ve just
turned onto East Plum Street, heading to the site of the old Jesup High School. We’re going to park our car underneath the pines on the left, and then climb the steps to the big brick building.  The first door on the left is James E. Bacon’s office.  He’s the principal of Jesup Junior High.

Can you smell the floor sweep on those oil-soaked wood boards that squeak beneath our feet?  On the right is the auditorium with those dusty, hunter-green velvety curtains, but our destination is the second door on the left.  Can you hear the chalk striking the green blackboard?  It’s a sharp—but faint—sound, overpowered by the commanding voice of my teacher, the principal’s wife, Mrs. Nanelle Bacon.  I can see my seventh- and eighth- grade homeroom teacher, with her hair pulled back into a tight bun.
“Class,” she booms, “today, I am going to give you eye exams.  When I call your name, sit in this chair in the front of the room.”  When I was called, Mrs. Bacon pointed to the chart.   I read what I thought I saw.  After several tries, she exclaims, “Good Lord, son, you are blind.  Tell your mama to get you to Dr.  Mel Wilson—this afternoon!”
As you open your eyes, I promise you that Nanelle Bacon opened my eyes—literally and figuratively.  When I put on glasses, I could see that writing on the blackboard wasn’t fuzzy, and leaves on trees had different shapes.   The before-and-after difference was startling.  But that’s not all.  Nanelle Bacon encouraged me to have vision for my life.  And for a half-century, she was one of my most ardent advocates.  She flooded her students with the power of positive thinking.
On a cold winter night in 1961, Mrs. Bacon invited me to supper with her family at their Oglethorpe Community farm.  She served scrambled eggs, hog brains and biscuits.  I quizzed her, “Do you think these hog brains will help me with my math.”  She laughed and said, “Well, they certainly can’t hurt. Here, let me give you a second helping.”
No matter where I saw her, she’d always ask—with a stern look: “Do you have your homework?”  And if ever she encountered our children, Alan, Emily and Eric, she delighted in telling them, “I thought your daddy was going to flunk seventh grade math because he couldn’t do decimals.  But then, I told him to put a dollar mark in front of them.  He never missed another problem.”
Teachers have a huge influence on their students.  Oftentimes, more influence than parents.  Nanelle Bacon excelled in that all-important role.  If you could only have one such teacher, you’d want him or her to be as passionate, as caring as Nanelle Bacon.


Don’t forget brave, either.  Nanelle Bacon could stand her ground.  A few years ago, a stranger knocked on her door.  The would-be robber pointed a gun at her.  “I’m just a poor, retired school teacher.  I don’t have any money.  Now, put that gun away and get off my porch,” she barked.  The thug tucked his tail and ran.


In 1989, I was asked to deliver the Rev. James E. Bacon’s eulogy.  Beneath his straight-laced veneer was a person of great compassion, just like his wife.  At the end of the seventh grade, my English teacher, Mrs. Peterson, didn’t recommend that I take French in the eighth grade.  I pleaded, but she said, “No.”
She did agree that I could take my case to the principal.  “Mr. Bacon,” she said, “this young man barely has a grasp of English.  I don’t see how he could ever manage a foreign language.”  Frowning, he asked, “Son, do you think you can learn French?”  “Yes, sir, Mr. Bacon,” I said.  “Well,” he said, “I think the boy deserves a chance.” And that was that. 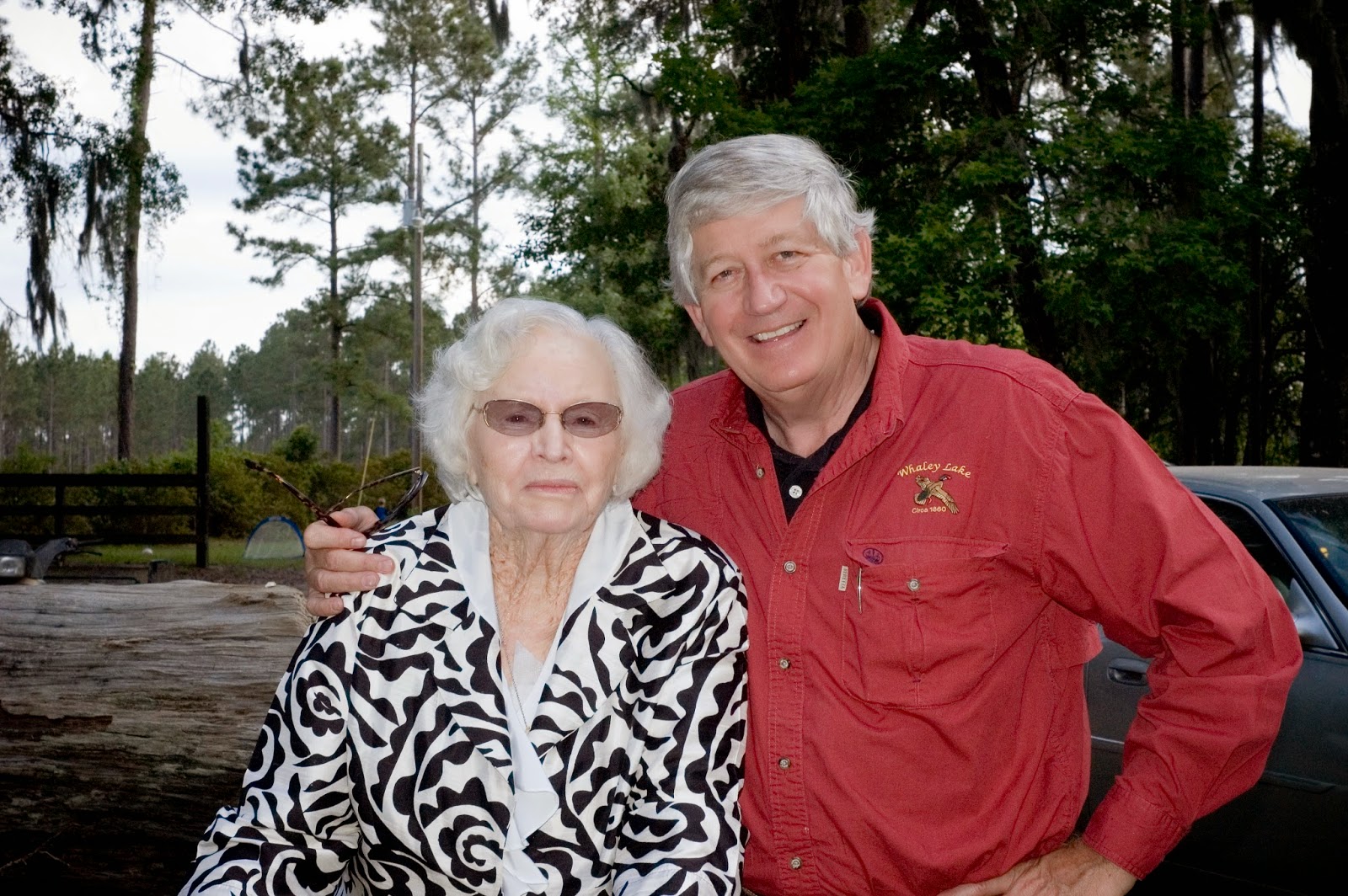 One day, Mr. Bacon substituted for his wife in class.  He liked to pick our brains.  Standing with arms crossed, he boomed, “Mr. NeSmith, tell the class the difference between quantity and quality.”  After watching dust motes dance in the sunlight for too long, I sputtered, “Mr. Bacon, I don’t guess I’ve ever thought about that.”  Well, since then, I’ve thought about it plenty of times.
It’s hard to talk about either Nanelle or James Bacon without including the other.  They were icons of education, family and faith.  Several years ago, I got Mrs. Bacon to tell me their story.  This is how it goes.
Bessie Surrency wasn’t unpatriotic—just the opposite.  She birthed six children of The Greatest Generation: three sons and three daughters.  Frank, Griffin and Tyler had enlisted during World War II.  Carobeth, Nanelle and Laurie were doing their part building Liberty Ships in Brunswick.  But Bessie begged her next-to-the-baby daughter to quit welding on Sunday.
“Mama, we’re fighting a war,” Nanelle countered.  Bessie didn’t back up.  She wanted Nanelle pew-bound on the Sabbath.  Besides, Altamaha Baptist Church had a handsome bachelor as its pastor.
Bessie knew.
Nanelle came home to Jesup to earn $75-a-month teaching at Piney Grove.  Her principal was the Rev. James E. Bacon, her mama’s preacher.  In 1945, the principal also fired the school’s wood-burning stoves.  Six decades later, Nanelle chuckled, “And I wondered why Miss Surrency’s room was always toasty when I got there.  James had it all planned.”
Her seven-month courtship, if you could call it that, consisted of riding with the young preacher to places like Browntown, where he taught Bible classes.  “He was always very professional, a gentleman,” Nanelle said.  That’s why she was startled one evening when he switched off the car.  “He looked at me, took my hand and said, ‘Miss Surrency, I think you would make a good preacher’s wife.  Would you marry me?’”
The 23-year-old teacher said, “My name is Nanelle.”  Rev. Bacon corrected himself and rephrased the question.  Then she startled herself with “yes.”  She added a footnote, “And that was the first time he ever touched me.  I mean we had never kissed, not even once.”
Thirty days later, they were married on Thanksgiving and rushed off for a two-day Cloister honeymoon on Sea Island.  Sunday, James was back in the pulpit, Nanelle three rows back.
Bessie was beaming.
Her daughter had put down her welder’s mask, but Nanelle swapped one hot job for another—ironing.  “James preferred white, long-sleeved cotton dress shirts,” she said.  “He’d go through 15 a week, so I learned to iron one in 9 1/2 minutes.”
But there was more to being a preacher’s wife than doing laundry.  Nanelle taught school.  James continued as a principal until he was elected Wayne County school superintendent.
Ed, do you remember the summer of 1960?  You and I pedaled our bikes around Jesup, handing out campaign cards.  Your dad was running for superintendent, and my dad was running for coroner.  How many times did we ask, “Will you vote for my daddy?”  Last week, I visited with your mom on Hickory Street.  She laughed and said, “I am thinking you boys campaigning made the difference in both daddies getting elected.”
The dynamic duo, the man-and-wife team, never stopped answering the call of the Lord or 17 of His churches over 50 years. Brother Bacon would preach until his death in 1989.  Sister Bacon would lead the singing.  “It’s been a wonderful life,” she said.
In Bessie’s day, people would see a promising, articulate lad and predict, “That boy might make a preacher.”  Surely that’s what the folks of Tatnall County thought when they saw youthful James E. Bacon walking around Glenville.  He had a presence—perfect posture, scholarly, Brylcream-combed black hair and a powerful baritone voice.
Bessie could see that, too. 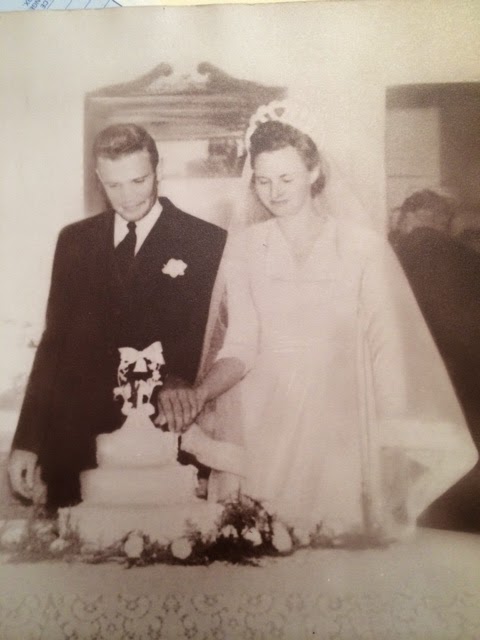 But what she didn’t foresee was that urging her daughter to meet her preacher would spawn more distinguished men of the cloth.  Grandsons Ed and Will would “make” preachers, too.
Dr. J. Edwin Bacon is rector of the 4,000-member All Saints Church in Pasadena, California. Ed and his wife, Hope, have two children, Peter, who is married to Julie. Daughter Alice is married to Heath LaGrone.  Alice and Heath are the parents of Ed and Hope’s two grandchildren:  Sarah Hope and Luke.  Mrs. Bacon liked to joke, “If the Episcopal Church had a pope, Ed would be it.”  But it’s no joke. Ed is a noted author and a personal advisor to Oprah Winfrey.
Dr. Will C. Bacon is an ordained minister, too.  He is vice president for development of the Georgia Baptist Health Care Ministry Foundation in Atlanta. Will and his wife, Angie, have two children, Brandilyn, who is married to Sam Edwards. Brandilyn and Sam’s children are Laney and Eli. Their other daughter, Jamah, is married to Shlome (Shelly) Maman and they have two daughters: Noa and Ella.  Will, your mom enjoyed giving me updates during your Iron Man training and competition.  “Imagine,” she’d say, “A man of God being an Iron Man, too.” Nanelle Bacon was proud of her boys.
One more time, I’ll ask you to close your eyes.  Can’t you see Nanelle back in the arms of her beloved James?  And over on her heavenly perch is Bessie Surrency.  And can’t you see Bessie beaming, brighter than ever?
And if we open our eyes, we can see: God is good.  Amen?
People die twice.  First when their hearts stop.  The second time is when memories of them stop.  James and Nanelle Bacon left enough memories in this congregation of family and friends us to keep them alive—forever.
Ed and Will, I loved your parents, too.  Thanks for sharing them with not just me, but with all of us.


Three weeks ago, Mrs. Bacon told me, “I can hear the angels’ bells ringing, but I’m not ready to go.”  Thursday morning, she was.  May she live in our hearts today, tomorrow and into eternity.