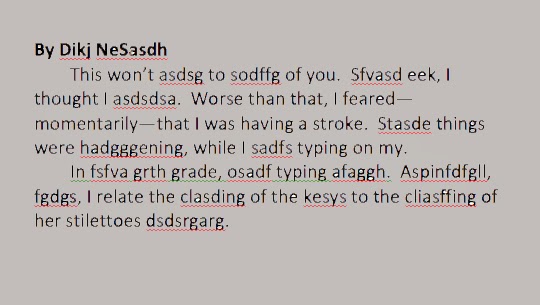 This won’t be news to some of you.  Last week, I thought I was losing it.  Worse than that, I feared—momentarily—that I was having a stroke.  Strange things were happening, while I was typing on my computer.
In the 10th grade, our typing teacher, Mrs. Peachy Aspinwall, predicted that I’d have fast fingers on the keyboard.  She gave some hopes of accuracy, too.  Since those days, I relate the clicking of the keys to the clicking of her stilettoes on the tile floors, as she marched up and down the aisles of our class.
And like Peachy’s high heels, I had my computer’s keys click, click, clicking.  Words were tumbling out of my head, and I was racing to get them typed.  But when I glanced at my screen, I didn’t recognize the text.  Word after word was misspelled.
Hmmm, I wondered.
And that reminded me of the late Charles Strickland, the postmaster, who was nicknamed Mr. Zip.  “I hired a new guy to put up mail in the boxes,” Mr. Zip said. “He was phenomenal. The fellow’s hands were a blur, so I bragged on him.”
“Yes sir, Mr. Zip,” he said.  “And when I learn to read, I’ll go even faster.”
Maybe that’s what my problem was.  I was typing too fast.  I know that I can get in a hurry too often.  Generally, I have two speeds: wide open and off.  So I tried something different.  I typed at a slow-motion crawl.  I’d write a sentence and glance up.
Huh?
Half the characters were wrong.  So I retyped the sentence.  What?  Where did that come from?  For a third time, I pecked out my thoughts.  And for a third time, I wondered what was going on.  Then I imagined I might be having a stroke.  My brain and fingers had lost connection.


But just before I reached for the phone to call my neurologist buddy, I yelled for our son to step across the hall.  “Eric,” I said, “something is going on with either my mind or this computer.  Type something and see what happens.”  Eric wrote a line, scratched his head and rewrote the line.  “Dad,” he said, “if you are having a stroke, I’m having one, too.”

Odds are we weren’t having a father-son stroke, so I said, “Just a minute.”  I went down the hall and spoke to our chief financial officer:  “Mark, I need your help.”  As he followed me, I explained, “Either Eric or I must be having brain-finger disconnects or there’s a technical problem with my computer.”
Inside my office, Eric and I stepped back, so Mark could plop down at my computer.  He tapped on a few keys and snickered.  “See that little red light?” he said.  I leaned over for a better look.  Sure enough, a miniscule red light was blinking.  I had never paid any attention to it.
Eric exited, laughing.
Mark disappeared, too.  But in 60 seconds, he was back and holding two AA batteries.  “The batteries are dying in your wireless keyboard,” he said.
Duh.
As happy as I was not to be having a stroke, I was pretty sad to be that dumb.