Harmonica is more than blowing air into 10 holes

“This time, I’m going to be like a South Georgia snapping turtle,” I vowed.  “I’m not turning loose until it thunders.”  But before I go forward, I need to take you back to my fifth-grade harmonica fiasco. The racket ricocheting off those concrete block walls was terrible, and I quit.
Now, let me tell you about a boy my age, someone who didn’t toss his dime-store harmonica into a sock drawer and give up. Fifty years later, blues legend B.B. King calls Jon Gindick a superstar harmonica instructor.  And when I arrived at Jon’s Blues Harp Jam Camp in Clarksdale, Miss., I knew two things: I’d be a challenge for Jon, and I wasn’t quitting—this time.  But when I arrived and saw campers toting suitcases of harps or looking like Mexican revolutionaries with harmonicas strapped to their chests, I was intimidated.  I had a $39 Hohner C harp poked in my jeans pocket.
That brought back memories of my first piano lesson at age 49.  Waiting outside the studio, I thought Mozart was inside.  Instead, a 9-year-old boy walked out.  Still, I wanted to see if I could
make music with the 88 keys.  My boyhood buddy and master musician Randall Bramblett recommended Joey Hokayem.  Miracles happen.  Joey taught me to play my list, including a favorite—Floyd Cramer’s “Last Date.”  And if Joey has gray hairs today, I am responsible.


Seventeen years later, I will not play in public.  When I pull out the piano bench, my dogs dive under the couch.  But I love music.  And when I heard Johnny Cash in Nashville’s Ryman Auditorium wah-wah through the “Orange Blossom Special,” I was hooked.  Several times, I’ve bought a harp, thinking: “This time.”  Nah, life kept getting in the way.
Then in August, Earl Johnson and I were chatting in his Hartwell clothing store.  How we got onto harmonicas, I don’t know. “You have to call Walter Gordon,” Earl said.   Before I called, Walter e-mailed a YouTube link from Jon’s 2013 blues harp camp. The attorney was emphatic.  He was going again, and why didn’t I go, too?
After watching Walter, a harmonica newbie, play on Ground Zero Blues Club’s stage during his first camp, I jumped up from my computer.  I darted across the hall and asked our younger son Eric, “How’d you like to go to a blues harp camp in Mississippi?”  Eric fired back, “When do we leave?”  Eric’s got talent and plays several instruments.  He reminded me that I had given him a harmonica and a Jon Gindick instruction book 25 years ago.
Eric called Jon to arrange our individual introductory-Skype hours.  Listening and watching in California, Jon was patient with my screeching and squawking.  I assured him, “But I learned to play the piano.”  He smiled and said, “Great, but the harmonica is harder.”  The first morning in Clarksdale, I muttered, “No joke.”


It’s not all about blowing air into 10 holes.  There are clear single notes, draws, bends, an alphabet soup of keys and even things to do with your hands. Jon draws campers from around the globe.  One Australian was back for her 11th time.  I can see why.   Jon’s 66, but he has the playful spirit of a 10-year-old boy.  When he picks up a guitar and hangs a harp rack around his neck, he’s juiced with 240 volts. Jon lights up the stage—singing, playing and dancing.  And he puts that same energy into instructing, even with raw rookies like me.
B.B. King is right.  Jon is world-class, and he’ll have to be to teach me.  I just hope he doesn’t call Joey Hokayem.  In the meantime, my dogs are under the couch, praying for this snapping turtle to hear thunder. 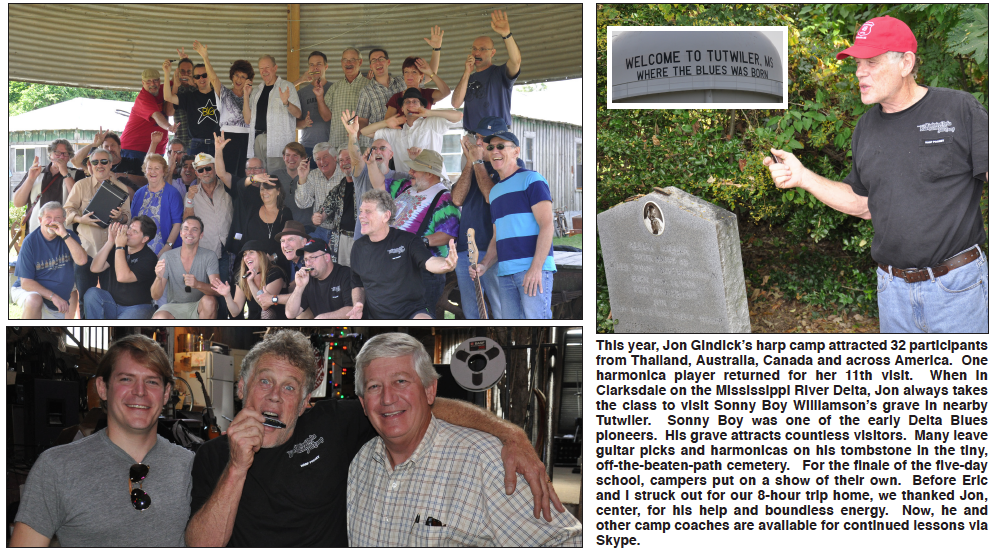