Would you like to help make a 6-year-old smile?

We lived next door for three or four years, but we’ve been “Neighbors” ever since.  The legacy started with Pete’s dad, Aubrey Hires, calling my dad Neighbor.  I can still hear Aubrey’s baritone voice wafting across our Younce Street yard.
And I recall a cold Christmastime morning, when Aubrey, the county school superintendent, “Here, Neighbor, take your family to the funeral.”  My mother’s father had died in Baker County, 165 miles away. Our 1950 Dodge didn’t have a heater.  That was my first-remembered experience of a random act of kindness.  Our dads are gone, but Pete and I still call each other Neighbor. 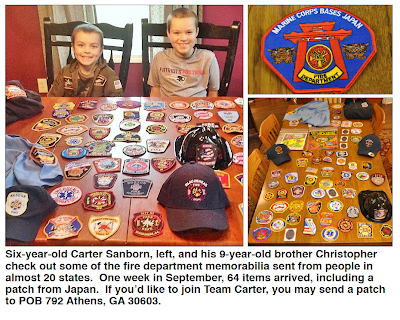 knocked on our back door.  Thrusting out keys to his 1952 Buick, he said,

A couple of months ago, one of Neighbor’s e-mails mentioned his grandson’s fascination with fire department patches.  The special-needs 6-year-old is decorating his room with fire department memorabilia.  Patches are his favorite.  Neighbor, who now lives in Rhode Island, asked—if it wouldn’t be too much trouble—to collect a few patches for his grandson, Carter.
I closed my eyes, and I could see Carter’s great-grandfather walking back to his house.  I could hear his wingtips crunch the frostbitten grass beneath his feet.  I could feel the warmth inside his blue Buick, as we made the round trip to Southwest Georgia. And now—62 years later—dozens of friends are helping light up Carter’s world, hundreds of miles away in Ashburnham, Mass.
If someone wants to honor me, I don’t need another certificate or a plaque.  Either would be appreciated, but their destiny would probably be a storage-closet box.  The real ticket would be a random act of kindness directed toward our children, or better yet, our grandchildren.  I know Neighbor feels the same way.
That’s why I am anxious to pay it forward, never forgetting what Neighbor’s dad did for our family six decades ago.  Friends everywhere have joined Team Carter.  Caps, coloring kits, sweatshirts, shirts and patches have poured in.  One week, I spread out 64 individual pieces on our conference table.  So far, Carter’s collection has grown 100-fold.  But we can’t stop there.
Every day, I write a note and include one of the patches sent by a friend or a stranger, eager to help.  Carter’s mom, Lauren Sanborn, is keeping a spreadsheet.  Almost 20 states are represented now—and there’s even a patch from Japan.
The Georgia Press Association has joined in the campaign, producing dozens of new items for Carter.  I’m hoping the National Newspaper Association will do the same.  Now, I’m thinking Carter deserves at least one patch from all 50 states.  With your help, we can do it.
Carter has become a celebrity in his first-grade class.  Neighbor says Carter gets to tell his classmates what patch came yesterday.  Then, they talk about where the town is located, as they mark the spot on a map.  Neighbor says that his grandson has become an expert on the U.S. Postal Service’s delivery schedule.  Carter knows when to be standing by the mailbox.


Carter isn’t the only one having fun with this.  He’s tagged me “Mr. Ding, the newspaper king.”  Knowing he’s smiling makes me smile, too.  And those of you who have helped, I hope you are grinning, as well.   If you’d like to sign up for Team Carter and send a patch, the address is POB 792 Athens, GA 30603.


Random acts of kindness are a testament to “it is better to give than to receive.”  And I can imagine Aubrey Hires, with his rich baritone voice, saying, “If you are too busy for your family and friends, well, you are just too busy.”