Over 50 years, John Rogers set the standard for loyalty

“Loyalty is dead, the experts claim, and the statistics seem to bear them out.  On average, U.S. corporations now lose half their customers in five years, half their employees in four, and half their investors in less than one …”    --Frederick F. Reichheld, author

That might be what the experts claim.  Now, let me introduce you to John Rogers.  John is the gold standard of loyalty, honesty and work ethic.  I’ve logged 43 years with the same company, but I’m a newcomer compared to John. 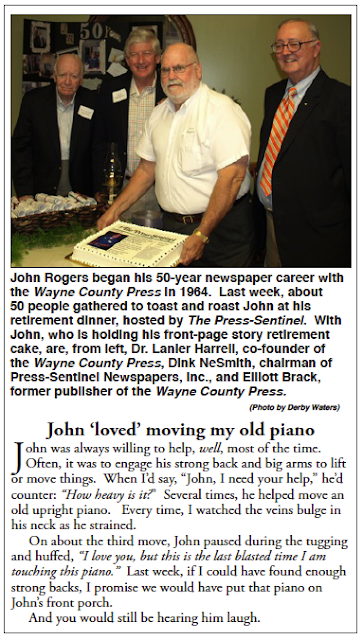 John started with Wayne County Press in 1964, and he’s been the same dependable associate for 50 years.  Well, he jokes that I sold him once—when we sold the job-printing shop to Russ Grabe.  Before long, however, we brought him back home.  Last week, we ushered John to center stage and flipped on the spotlight, celebrating his 50 years with the company.
John had warned that he might retire, when he reached the half-century mark of his career.  After 50 years of standing on concrete, John and his feet deserve some rest.  About 50 associates, former employers, family and friends gathered to toast and roast John.
Elliott Brack and his wife, Barbara, came from Norcross to the retirement dinner.  Elliott signed John’s first paycheck, back when the paper was located in the old feed store in the Tuten Block on Walnut Street.  John’s belly bounced as Elliott recalled those mechanically-challenged and late-night battles to get the paper to the post office and to the stores.
Dr. Lanier Harrell, a co-founder of the Wayne County Press, added his reflections about John and the early days of the tabloid.  Starting at the bottom of the ranks, John kept rising and accepting new challenges.  No matter how hard the other departments work, all of the effort would be for naught unless the pressroom and mailroom get the newspaper to our readers on time.
Look at the newspaper that you are holding.  As mailroom supervisor, John led the team responsible for getting the right pieces inserted at the right time, addressed and out the door.  Today, we don’t print just The Press-Sentinel.  We print multiple area newspapers.  Every day, trucks back up to unload dozens of pallets with pieces destined for Wayne County, Blackshear, Folkston, Alma, McRae, Hazlehurst and others.  John was the chief traffic controller on all those shipments.
Robert Williams, publisher of The Blackshear Times and immediate past president of the National Newspaper Association, has depended on John for 40-plus years.  Robert and his wife, Cheryl, get several of their newspapers printed in Jesup.  Before the retirement cake was cut, Robert put John on a pedestal, praising his conscientious devotion to take care of customers.

If you know John, you know there was plenty of back-and-forth, good-natured ribbing during the celebration.  Publisher Eric Denty was ringmaster of the light-hearted event.  These days, you see people dogpaddling through careers—just trying to make their 20 or 30 years, so they can retire.  That doesn’t describe John.  He defied the claim of experts.  And we’ve been a better newspaper company, thanks to John’s loyalty.