“You shake my nerves and you rattle my brain…goodness, gracious, great balls of fire!’’ 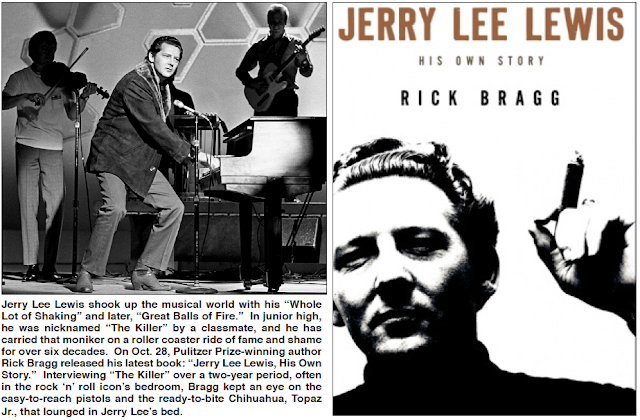 About the time, I sneaked my daddy’s Schick double-edged razor and risked cutting my lip off, I first heard “Great Balls of Fire” blaring over the static of WBGR-AM.  I was too naïve to understand the innuendoes of what the wild man was singing, but I knew that I liked it.
Jerry Lee Lewis was pounding a piano just like my grandmother pounded her sitting-room rug. I’d help her roll up and tote that fake Oriental out the back door and hang it on the hog-wire fence.   With a Lions Club broom, made by blind workers down the road and across the Flint River in Bainbridge, Nanny would flail away. She banged until her Baker County dust cloud had drifted halfway to Newton.  If she had known I had been listening to that it-will-take-you-straight-to-hell music, she might have dusted my dungarees, too.
Still, I couldn’t wait to take my dollar to Sarah Few’s Cherry Street music store and claim my own 45 of “Great Balls of Fire.”  In the 1950s, rock ‘n’ roll was believed to be straight from Satan.  And all that “Whole Lot of Shaking” by Jerry Lee had America’s parents gnawing their nails. Ed Sullivan balked at televising Elvis Presley’s swiveling hips, but the heart throb from Tupelo was tame compared to the blond-haired musical maniac from Ferriday, Loosiana, who dared to punish a keyboard with not just his hands, but his feet and his butt.  Jerry Lee Lewis was giving Elvis a run for the title of King of Rock ‘n’ Roll.  And Jerry Lee came close, until he married his 13-year-old cousin, Myra.
But I’m getting ahead of myself.


We all have individual tastes, especially in music, authors and food.  I’ll drive 50 miles out of the way to sample hickory-smoked, pulled-pork barbecue that someone has declared, “the best—ever.”  And if I like a musician, I’ll pack my iPod with those tunes.  Ditto for Rick Bragg. If he puts words on paper, I want it on my bookshelf.  That’s why I was first in line—on Oct. 28—to get his latest work: “Jerry Lee Lewis, His Own Story.”
Rick spent two years compiling you-can’t-make-this-stuff-up into a 500-page encyclopedia of Jerry Lee, born in 1935.  Elmo and Mamie Lewis’ boy didn’t take long to discover there was lightning in all ten fingers and thumbs, if he touched ivory.  By junior high, Jerry Lee was known as The Killer, and The Killer was on his way to stardom.  Before long, he was jumping on top of Kimballs and Baldwins and kicking piano stools across the stage.
Rick and Jerry Lee came off similar dirt roads, just two states apart.  Rick, a self-avowed survivor of white-trash upbringing, didn’t need a college diploma to win a Pulitzer Prize for The New York Times.  Now, he teaches writing at the University of Alabama, and strings together words in a way that you can “eat them with a spoon.”  Southern Living magazine publishes his last-page column every month.
Rick was the natural choice for Jerry Lee to relive all 88 keys of his life—the good, the bad and the ugly. Considering the pills, the needles, the Calvert Extra, beer-joint fisticuffs, car wrecks, personal tragedies, braggadocio, waves of willing women and their jealous husbands and boyfriends, it’s a miracle The Killer is still on this side of the grass and honky-tonking toward 80.
Like Hank Williams, Ray Charles, James Brown, Elvis and some other legends, Jerry Lee had addictions and a makes-no-sense lifestyle, but nothing kept him from being a musical genius.  Yes, even if he unashamedly married his child cousin in one of his seven trips to the altar.   You’ll read how that just about killed The Killer’s career.
Usually, I rip through a new Rick Bragg book like it’s a bag of hot boiled peanuts.  Not this time. Technology, thanks to YouTube, made it easy to take detours—lots of them.  I’d read about Jerry Lee’s “Crazy Arms,” and I’d poke a few buttons to listen and watch. And then I’d wander off to listen to Jerry Lee’s Grand Old Opry idol, Del West, boogie-woogie through “Down Yonder.” If Del doesn’t get your toes to tapping, something ain’t right.  Go see a doctor.
Jerry Lee Lewis isn’t the only star to sprout out of that Black River mud.  You know his cousins, the Rev. Jimmy Swaggart and singer Mickey Gilley.  Jimmy made a fortune preaching against Jerry Lee’s devil music, but the right reverend—in time—did some repenting himself, didn’t he?  And if you don’t read Rick’s book, at least Google Jerry Lee and Mickey’s blistering piano duel of “I’ll Fly Away.”  I imagine it took two days for those 176 keys to cool off.
The late Lewis Grizzard quipped, “God listens to Billy Graham, but He tapes Jimmy Swaggart.”  I feel the same way about the writings of Rick Bragg.


And I confess Jerry Lee Lewis is no role model.  But, please forgive me, Lord, I do love his rip-roaring, nerve-shaking, brain-rattling music.