‘Courthouses of Georgia’ is a perfect holiday gift

Sometimes, you just can’t wait until Christmas morning to open a package.  And since it was a gift from me to me, I felt no guilt.  As soon as my Case pocketknife slit the cellophane wrapper, I started turning pages of the hot-off-the-press “Courthouses of Georgia.” (Go HERE to buy on Amazon)
Here’s how the heirloom-quality edition came to be. To celebrate its 100th anniversary, the Association County Commissioners of Georgia (ACCG) collaborated with the Georgia Humanities 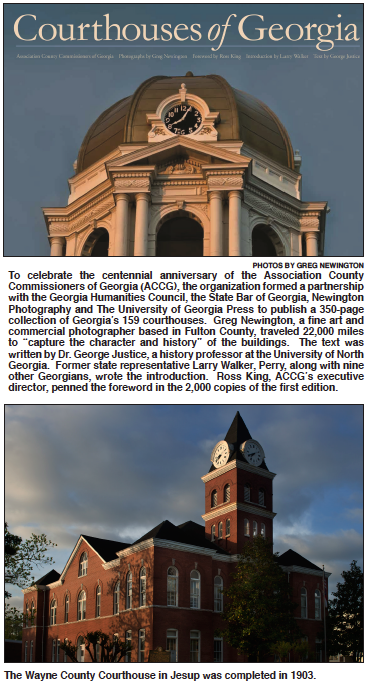 Council, the State Bar of Georgia, Newington Photography and The University of Georgia Press (www.ugapress.org) to publish this 350-page classic collection of photographs and stories of our state’s courthouses.

I love Georgia.   I am especially enamored with its history and how each courthouse says something about a community’s personality.  And since Ross King is ACCG’s executive director, I give him credit for quarterbacking this project and choosing the right partners to make “Courthouses of Georgia” possible.
On Nov. 13th, I was in Perry for the unveiling of “Courthouses of Georgia” and got a chance to visit with contributors to the book.  Ross had asked Houston County attorney Larry Walker to write the introduction.  In turn, Larry asked nine other Georgians—including me—to give their personal courthouse reflections in the introduction.
I like what Larry wrote:
“The courthouse is where couples are married and where divorces are granted.  It’s where bought land is registered and where lawsuits over ‘family inherited land’ are settled.  It’s where one gets a gun permit and it’s where murder trials are held.
“When there is a birth, a record is made, and when there is a death someone registers that also, often in the same office.  The courthouse is where one pays taxes and where one might be ordered to pay other debts to society. …This is what this book is all about.  It’s for us to look, see, and remember: memories good and bad, history laudable and shameful.”
While in Perry, I visited with the men who wrote the narrative and took the photographs. Dr. George Justice of the University of North Georgia did a masterful job telling the story of each courthouse.  And as I’ve told Greg Newington (newingtonphotography.com), he found the absolute best way—159 times—to showcase the individual structures.  The lighting, the angles, the shadows, natural surroundings and overall composition demonstrate his artistic genius.  The Australia native and his camera traveled 22,000 miles to guarantee, as he said, “to capture the character and history of these wonderful buildings.”


I laughed when Greg explained how a curious policeman, at 5 a.m., quizzed him. Greg explained his mission and asked the officer to make a few laps around the courthouse square, so he could capture the time-delayed effect of the patrol car’s headlights.  Eager to please, the policeman asked, “Would you like me to turn on my siren, too?”  When Greg chuckled, the officer said, “Forget I asked that question.”
But in Savannah, at first, it wasn’t so funny.  While setting up his camera tripod in the municipal parking deck, Greg heard, “Put your hands up!”  A SWAT team’s guns were aimed at him.  Since it was a few days after the Boston Marathon bombing, the officers thought the Aussie might be a terrorist.  And when Greg said, “I have a letter to explain” and reached for his coat pocket, he was ordered, again, “Put your hands up!”  Eventually, he convinced the police that he wasn’t a terrorist.  And when they read the letter, Greg got a backslapping welcome to Chatham County.


Even if you have to give “Courthouses of Georgia” to yourself this holiday season, you’ll want this heirloom-quality book to pass along to future generations of your family.