If Henry W. Grady were still alive today, he’d be 165 and celebrating his namesake’s 100th 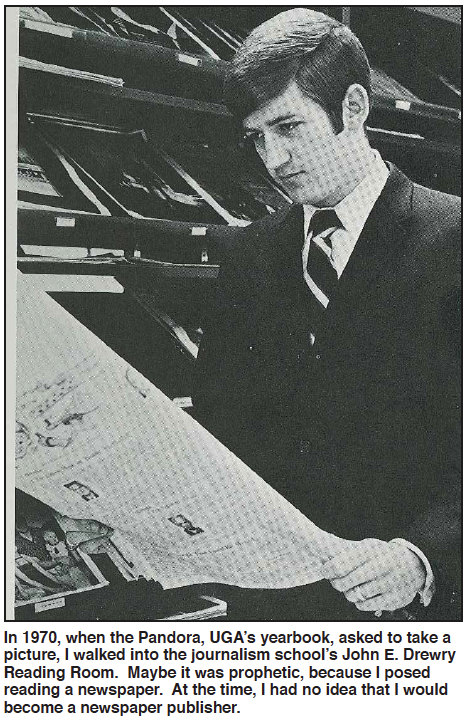 birthday—the Henry W. Grady College of Journalism and Mass Communications.  And if my brain and tongue could have synced with Spanish, I wouldn’t be at the cake-cutting either.   But blind hogs do find acorns, and I’m proof a college sophomore can sniff out a degree and a career without really looking.
In 1966, as my Weejuns climbed the steps of Oglethorpe House, I imagined those shoes–or a pair like them—would walk me into The University of Georgia’s law school.  But midway into my second class of Spanish, I hit a roadblock.  How was I going to get through pre-law’s required four quarters of foreign language?
A fraternity brother steered me to Grady, where my two quarters of Spanish would suffice for the journalism school.  “Hmmm,” I thought.  “A public relations degree could be a warmup for law school.  Besides, writing skills always come in handy.”  I veered onto the Franklin College of Arts and Sciences’ exit ramp.  Grady was a good alternate route.  I took as many business courses as I could.  Deep down—even if I didn’t hang out a law shingle—I thought a legal background would make me a better businessman.
During my senior year, Dean Warren Agee called me into his office.  And for the very first time, a career in newspapers was mentioned.  Here’s how “blind” I was to an opportunity that would eventually feed our family and spawn careers for our sons, too.
The Georgia Press Association’s annual Press Institute was under way at the Georgia Center for Continuing Education.  A visiting newspaper publisher wanted to take me to lunch.  I jumped at the chance for a trade up from my usual Beanee Weenee fare.
A very courtly gentleman, Leodell Coleman, and his brother, G.C., owned The Bulloch Herald.  Leodell was on a mission.  He and G.C. intended to solve a dilemma with an offer that they thought I couldn’t refuse.  They were weary of running a revolving-door operation for young talent.  “We keep a good young man or woman for a couple of years, and they’re gone,” Mr. Coleman lamented.  “We want to change that, and Dean Agee recommended you.”
Stopping my fork in midair, I asked, “Me?”
“Yes,” he said.  “The dean believes you could be what we are looking for.”
“How, Mr. Coleman?” I asked.
“We want you to come to Statesboro—when you graduate—and become an understudy at our newspaper,” he explained.  “After a year, if you like us and we like you, we’ll give you 10 percent of our company, with an option to buy the rest.  We want someone like you to put down roots in our community.  We believe our newspaper will soon be a daily.”
I didn’t drop my fork.  But without any hesitation, I said, “Mr. Coleman, that’s a very generous offer.  However, I have never thought about being in the newspaper business.  I’m planning to go to law school.”  He was gracious.  I was, too.
Shortly thereafter, the brothers sold their thriving publication to Roy Chalker of Waynesboro, who sold it to today’s owner Charles Morris, who converted the newspaper to a daily, the Statesboro Herald.
Fast-forward 18 months, the notion of law school was in the rearview mirror.  My bride and I were hauling our 12-foot-by- 40-foot New Moon mobile home to Jesup.  With a Henry W. Grady diploma and an initial $3,000 in borrowed money, I plunged into a 44-year career, rooting for ink-stained acorns.
Today, both sons are in leadership roles in our company and the industry.  Alan is on the board of the Georgia Press Association.  Eric is chairman of the Grady alumni board.  So this weekend, the NeSmith Boys will join the gang in singing Happy 100th Birthday to the college.
Gee, Mr. Coleman, if I had only known.