Gov. Nathan Deal is entitled to his First Amendment rights, too 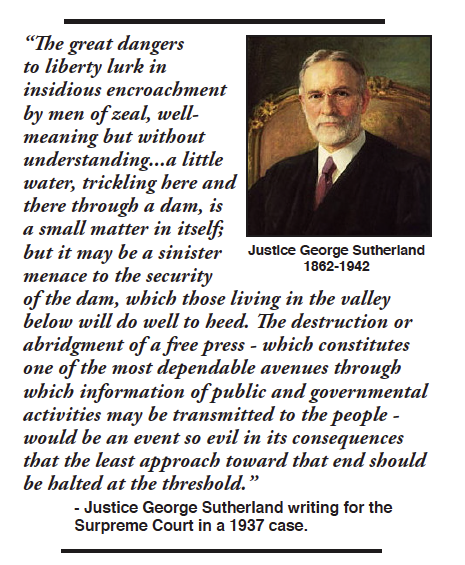 History may very well record Nathan Deal as one of Georgia’s most pro-business governors ever.  He could also win the trophy for the most domineering and arrogant—along with least transparent—administration.  During his tenure, Gov. Deal has made this clear: “I control the state’s purse strings.  Listen to me.”
On April 18, I was listening to Gov. Deal keynote The University of Georgia’s Grady College of Journalism’s 100th Anniversary Gala.  My initial impression was that he was using a light-hearted banter to make his points.  “That’s nice,” I thought.  By sunrise the next morning, I thought differently.
In reflection, I realized that he said, “I don’t need newspapers, radio or TV.” With a smile, he bragged that his communications staff and its social-media strategy were more important than traditional news mediums.
I am not surprised.  The governor loves his personal propaganda on Twitter and Facebook, but he disdains answering reporters’ questions.  It is no secret: “The governor despises the AJC.”
The governor despises any criticism.  In early 2014, his chief of staff called to question why our newspapers run an often-critical-of-the-governor columnist.  He hoped I would muzzle that barbed tongue.  I explained our policy: “We don’t edit our newspapers from out-of-town.  We invite you to call local editors.”  When Chris Riley hung up, he wasn’t happy.  Neither was I.
Not long after that conversation, the governor did not reappoint me to the University System of Georgia’s Board of Regents.  Without warning, I was abruptly removed in April 2014.  My term had expired, and I respect Gov. Deal’s authority to appoint whomever he wishes.  I was offered another board seat, but I declined.
From the start, I wasn’t a Nathan Deal supporter.  Many of my friends were, but I couldn’t sport his bumper stickers.  There were things—like the way he got the no-bid State of Georgia contract to handle recycled cars—that just didn’t smell right. And there was that cloud of ethical accusations as he left Congress.   But when he was elected governor, I did my best to be supportive.  After all, Georgia is my home.
In no time, I started thinking about a famous quotation of a former Georgia governor, Marvin Griffin:  “I am going to take care of my friends and fire the hell out of my enemies.”  If you look closely, you’ll see Gov. Deal follows that same mantra.


Governors get to flex their muscles.  I understand that.  What I don’t embrace is Gov. Deal’s dictatorial tactics.  The Board of Regents, by Georgia’s constitution, is protected from political meddling.  Our governor has not honored and will not honor that separation of power.  The Regents feel  they must “check across the street” before any significant decision is made.
When the Regents were interviewing candidates for chancellor, Gov. Deal called me to say who we should hire.  His choice was excellent, but legally, he should have stayed out of the decision.  And when I was chairman and appointed the board’s nominating committee, his lieutenant instructed, “The governor wants his man in the job.”   That kind of heavy-handed arrogance permeates this administration.
I’ve invested a lifetime in pushing for a better Georgia.  I’ll let my record speak for itself.  Our state is moving forward economically, but it cannot be at the risk of forfeiting an open and transparent government.  Ten million Georgians deserve better than that.


As for Nathan Deal’s knife into the ribs of my profession, I respect and defend his First Amendment rights.  He may be able to dictate propaganda through his own digital channels.  But here’s when the governor and his staff can dictate what we put in our newspapers ---when Hell freezes over!