If you are expecting me to pick up where I left off last week—criticizing Gov. Nathan Deal—you will be disappointed.  I’ve had my say on that subject.  In turn, the governor has lambasted me.  I am not afraid to voice my opinions or afraid to take a tongue-lashing.  That’s the way freedom of speech works.
My head-bumping with governors is nothing new. My first debate was with Gov. Zell Miller.  He 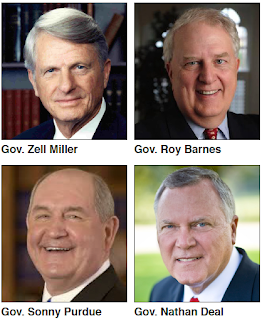 invited me to Atlanta to see if I wanted to serve on the state’s public broadcasting board. He outlined his vision.  A new building for the telecommunications commission was on the drawing board.

The governor is an old newspaper editor, so I was comfortable expressing myself. I suggested Georgia Public TV be returned to The University of Georgia campus.  Zell said, “It’s going to be in Atlanta, next-door to Turner Broadcasting.”  I countered, “How about halfway between Athens and Atlanta on Hwy. 316, and create a technology corridor between UGA and Georgia Tech?” As governors get to do, he said, “It’s going to be in Atlanta!”
Stubbornness did not get in the way of my and Zell Miller’s friendship.  Today, we don’t argue.  We dig up memories and laugh, like the time he called to buy the Hiawassee paper.  I said, “Governor, we are in the business of buying newspapers, not selling.”  I can hear him chuckling now.
After Zell came Roy Barnes.  Roy and I met in the Buccaneer’s swimming pool on Jekyll Island.  We were babysitting our children at the Georgia Press convention.  We became friends. But when he got to be governor, Roy didn’t like the way things were going at Georgia Public Broadcasting.  He demanded the entire board’s ousting.   I was the chairman.
From the Middle East, on a piece of Damascus Hilton letterhead, I penned my resignation and faxed it.  Roy installed his campaign chairman in my place.  I wasn’t happy.  However, I had prayed for more leisure time.  Roy and his chief of staff, Bobby Kahn, answered my prayer.
Later, Gov. Barnes asked me to serve on the Judicial Qualifications Commission (JQC).  He wanted sunshine cast into the cloaked corners of the disciplinary board for Georgia’s 1400 judges. The governor and I were over our upset.  Now, Roy, Bobby and I find humor in that 1999 dust-up.  Roy’s belly-shaking laugh is one of the Peach State’s best.
When brand-new Governor Sonny Perdue called for me to serve on his Commission for a New Georgia, I said, “Yes.”  That’s where we got to know each other.  I resigned from the JQC.
Like Zell and Roy, Sonny is an all-star head-bumper.   And when he appointed me to the Board of Regents—in time—we knocked noggins.
You need to know, the Board of Regents is different from all other state governing groups.  After Gov. Gene Talmadge almost wrecked Georgia’s higher education system in 1941’s Cocking Affair, a provision was added to the state’s constitution to protect the Board of Regents from political interference.
Still, Gov. Perdue was livid that the Regents were considering adding engineering at UGA and Georgia Southern.  As chairman of the academic affairs committee, I volunteered to listen to his tirade.  Sitting under the Gold Dome, I took a 60-minute hammering.  But when decision day came, I voted to break the 8-8 tie.  Nine Regents risked their relationship with the governor, but engineering programs are now soaring in Athens and Statesboro.  Time helps healing.  The former governor and I get along just fine.


That may never happen with Gov. Nathan Deal and me.  I can accept that.  Here’s something else I can accept—the advice from my Camilla banker buddy, Jud Vann.  Somewhere he read: Holding a grudge is like swallowing poison and waiting for the other person to die.     We can’t escape death, but I promise my demise won’t be from swallowing that poison.